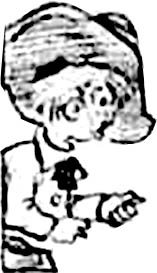 "Pete's Place" was a cowboy humor strip that appeared briefly in New Fun, which was the very first comic book series published by the company which would become DC Comics.

"Pete's Place" is set in the Old West"

It is not entirely clear who Pete is. In the "Pete's Place" strip that appears in New Fun #2 (as a one-row filler strip on the same page as a 10-panel "Barry O'Neill" strip), the first panel shows a saloon in a dusty Old West town. The sign on the saloon's facade reads "Pete's Place." In the foreground we see a cowboy named Buck, sitting on a horse. A boy is running up to Buck. The boy is identifiable as a young boy, perhaps 10 to 12 years of age, by his appearance as well as by his attire. He is both a cowboy (although perhaps only culturally) and a child.

The boy is never identified by name in this strip. Buck calls him "Buddy," but this appears to be a term of endearment rather than a formal name. What is confusing is that the boy seems to be the strip's main character. So... is this boy "Pete." That would seem to make sense, although it seems odd that a young boy would own a saloon, or that a saloon would be named after him.

Perhaps "Pete's Place" is named after the boy's father, who is also named "Pete."

So technically speaking, just from looking at the four panels of this strip, we can not say conclusively that the titular "Pete" is the young boy. But for the sake of simplicity, we will assume this is the case. The alternative is that we have a "Pete's Place" comic strip in which "Pete" does not appear, but which simply takes place in front of a saloon named "Pete's Place." 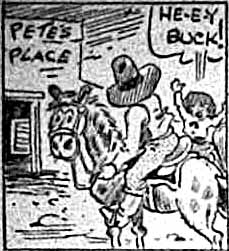