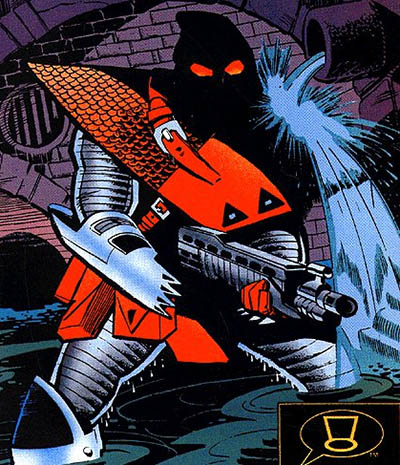 The Religious Affiliation of
The Black Hood
Wayne Sidmonson

Religion: obsessed with punishment of the guilty and the dispensation of justice; spirit

Other Names: Black Hood I

Enemy of: The Black Hood

Wayne Sidmonson owned one of the very first McBonnie Burger franchises. His restaurant was located in St. George, Mississippi. Wayne had a wife and two children (Lem and Kris).

After his restaurant was robbed on average once per year, Wayne Sidmonson became obsessed with the punishment of the guilty and the dispensation of justice; spirit. He obtained weaponry and donned a black hood to become a vigilante known as The Black Hood. He traveled to Seaside Cit, Maryland, which was the primary headquarters of the mob, into order to take his quest for justice right to the heart of the evildoers he sought to punish.

When Wayne Sidmonson died (while in his guise as the Black Hood), his spirit could not accept the reality of his death, and drifted into a place that was a sort of Limbo, inhabited by the souls of past wearers of the Black Hood.