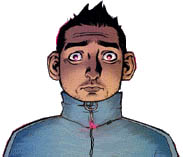 The Religious Affiliation of
Ali

Well, anyways, I was thinking of an idea for a UN-sanctioned super hero team with represenatives from different countries, and one of them is a female telepath from Turkey... named Sultana. And I suddenly realized that for the life of me I can't think of a single Muslim super-hero from either Marvel or DC.

As noted already, AK Comics (http://www.akcomics.com/indexenglish.htm) is a set of titles specifically about Middle-Eastern superheroes... though they deliberately avoid mentioning any specific religious faith in them.

In Marvel, the New Warriors (led by Justice, himself Jewish) have encountered Israeli superhero Sabra and Syrian champion Batal. Their religions aren't specified, but does anyone care to guess...?

In DC, of course, there are the Global Guardians, including Seraph (of Israel--definitely Jewish, given his powers) and Cascade (of Indonesia--religion unknown).

Of course, there are all types of religions present in various countries (the U.S. among them), so any number of heroes may or may not be Jewish or Muslim in their views. It seldom comes up in comics.

Not sure how I forgot about Vimanerama. It was great.

Ali's brother was Muslim but the hero characters in Vinamarama were of Hindu orgin, the lead one was even named Rama which is a Hindu deity.

Edit: Though there was a mixture of both in the mini. I read it as Morrison and Bond doing a Jack Kirby "Thor"-like take on the figures used.

[Comments section for this page]

...Once you stray out of the mainstream superhero comics, you get some more interesting stuff. Grant Morrison recently did a three-issue story for Vertigo (an imprint of DC Comics) - Vimanarama - about a Pakistani Muslim family in London faced with the eruption into the modern world of some ancient evils. Pakistani Islam has, I've been told, soaked up some Hindu flavor, and Hindu mythology reads like the kind of thing Stan Lee and Jack Kirby wrote anyway (Kirby was even hired by a film studio to do some concept art for a never-made movie based on Roger Zelazny's Lord of Light), so it should be an obvious place for a comics writer to look for inspiration...

Suggested links for further research about this character and the character's religious affiliation:
- http://www.adherents.com/lit/comics/Ali.html
- https://www.comics.org/issue/266768/
- http://comicbookdb.com/issue.php?ID=15024