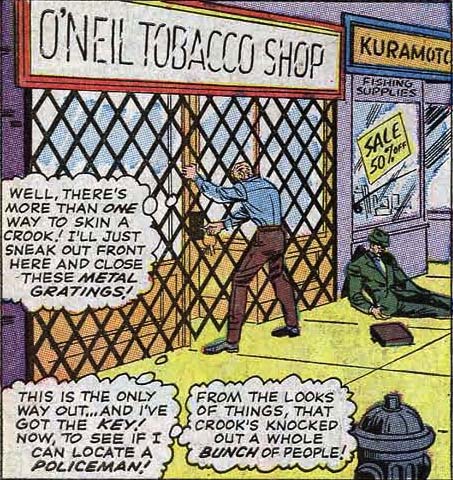 When the mutant super-hero Banshee first appeared, he acted as a petty thief. When he realized he was out of tobacco for his pipe, Banshee left Factor Three headquarters and used his powers to rob O'Neil's tobacco shop, located on the corner of Broadway & 44th St. in New York City. The tobacco shop was closed at the time. Banshee stole high-quality imported tobacco from the tobacco shop.

Banshee's theft of this tobacco shop brought him to the attention of the X-Men, who mobilized a mission to investigate. Eventually this led to a confrontation between the X-Men and the group Banshee belonged to: Factor Three.

Later (at the end of the issue) it is revealed that Banshee is not really a villain or a thief. He was being blackmailed by Factor Three (via an explosive headband) and forced to work for them.