The Religious Affiliation of
Nazi Werewolves from Space!

Unsuccessful playwrights Milo and Robert were desperately trying to write a play together. That were having trouble simply coming up with a basic premise together. At one point, they were so desperate that Milo suggested reviving an idea that he had: "Nazi Werewolves from Space!"

Milo actually thought there was tremendous potential in his "Nazi Werewolves from Space!" concept. Milo had even written an extensive outline for the play. But Robert (the more serious of the pair) was dead set against it.

The concept for a play, featuring Nazi Werewolves from Space as (presumably) the central antagonist characters, was mentioned in the play "Writer's Block" after Milo said in despair: "Look, none of these ideas are working."

Robert also knew that the ideas they had been discussing (the most recent being about a lonely castaway on a deserted island) were not working. But he remained hopeful that they would think of something artistic, inspirational, and successful. Robert told his friend and writing partner: "We just have to keep thinking."

With just those three words, Robert knew exactly what Milo was going to say. He quickly tried to avert his partner's attempt to inject his long-festering idea into their current efforts. Robert commanded: "Don't say it."

Milo continued: "C'mon, you said it was a last resort!"

Robert said: "We're not that desperate yet!" Robert's face clearly displayed the disgust he felt at Milo's legendarily lowbrow concept.

Robert was still trying to cut his friend off. He told him: "Don't say the name of that play."

Milo finally ends the audience's suspense by naming the name of the play he would love so much to work on, but which is partner won't abide: "That's right folks! The triumphant return of... 'Nazi Werewolves from Space!'"

With this, Milo pulled out a massive packet of paper and slammed it on their coffee table.

Milo proclaimed through his agitation: "No. We are not writing "Nazi Werewolves from Space.'"

Robert pointed out: "But I have the outline right here!"

Milo, livid, said: "We are better than that! There's got to be another way."

Their conversation about this would-be play was interrupted by a knock at the door. Their friend Maddie was visiting them, and they talked about other things. 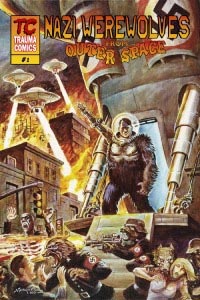 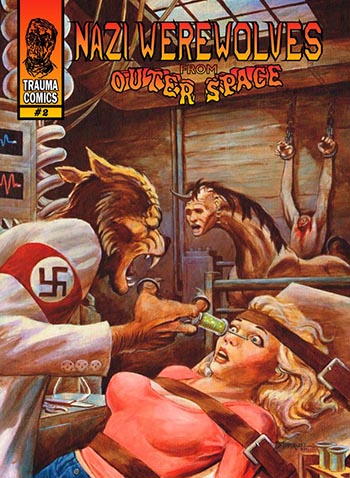