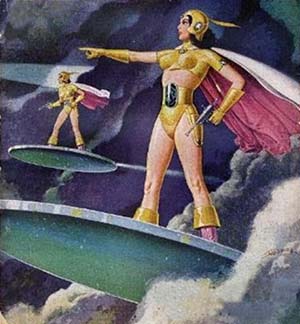 The Religious Affiliation of
Space Vixens from Planet Hell

Although the title of Robert's play suggests that the play's "Space Vixens" are from "Planet Hell," we believe that the phrase "Planet Hell" is intended as a dramatic, colorful reference to Mars, an is no intended as a distinct planet. Mars is a red-colored, hot planet and there is ample precedent in popular fiction and genre fiction for referring to Mars as "Planet Hell" or the "Hell Planet."