Bob Russo was a successful and popular professional baseball player. He admired Captain America, so when Steve Rogers decided to quit being Captain America during a philosophical crisis, Russo decided to take up the hero's mantle.

Russo donned a Captain America costume and went on patrol. From a rooftop he saw a gang of thieves robbing a fur store. Russo, as "Captain America," attempted to swing down from the rooftop on a rope. He badly misjudged his swing, however, and slammed into the brick side of a building.

Russo's crash into a wall broke his arm. The thieves got away. Russo decided right then and there to quit being Captain America. 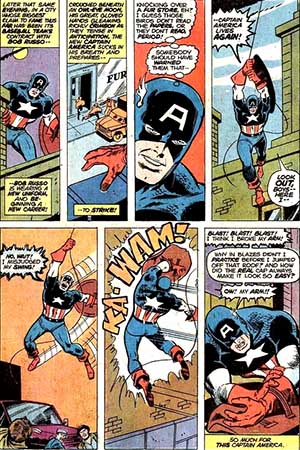 Suggested links for further research about this character:
- http://comicbookdb.com/character.php?ID=35875