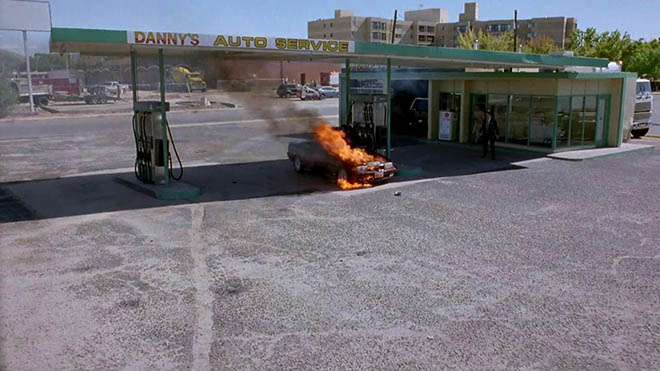 Danny's Auto Service is an actual service station (or "gas station") in Albuquerque. The service station was featured in two different "Breaking Bad" episodes, which were filmed on location.

In "Cancer Man," Walter White encounters obnoxious businessman Ken there. Walter had previously witnessed Ken's rudeness at Mesa Credit Union, as Ken constantly and loudly spoke into his Bluetooth device. Walter had done nothing then, but when he ran into Ken the second time, at Danny's Auto Service, Walter decided to do something. When Ken left his car and went into the gas station store, Walter quickly sabotaged Ken's car using a wet squeegee, putting it between the terminals of the car battery to cause an explosion, which quickly engulfed the car in flames.

Later, in the episode titled "Breakage," there was a montage scene showing Jesse Pinkman's crew selling meth on the streets. Skinny Pete is seen at Danny's Auto Service, selling illegal meth to a truck driver in the parking lot.