Enemy of: The Doom Patrol

We need to research this character further to properly determine whether he can properly be identified as an actual rabbi, or whether he was simply a lay (non-rabbinical) Jew who masqueraded as a rabbi.

Doom Patrol #86
The Doom Patrol teams up with Reb Chaim to stop Joseph Della Reina's attempt to force the Messiah to come prematurely. Note the image of the ten spheres of the Kaballah on the cover. 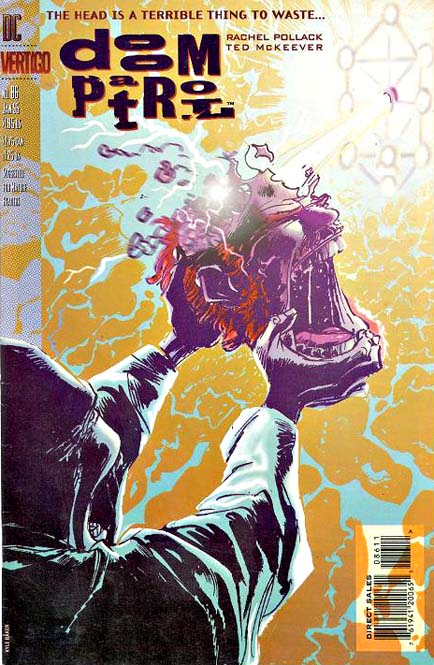 Pollack, Rachel. "A Song for the Small Face" Doom Patrol #84 Nov. 1994 (NY : DC).
When Reb Chaim resurrects the great rabbi known as "the ARI", Joseph Della Reina attacks Chaim and spirits the ARI away. Five years later, superheroes Robotman and Coagula attend a faith healing lecture-demonstration given by Rabbi Samuel Goldbaum (who is actually Della Reina in disguise). Later, Robotman and Coagula save Reb Chaim from an attack.

Pollack, Rachel. "Gates of Light" Doom Patrol #85 Dec. 1994 (NY : DC).
Reb Chaim meets the rest of the Doom Patrol and tells them a kaballistic version of the creation story. He also tells how the weak and corrupted Rabbi Della Reina had tried to "force the Messiah", but failed. He tells how the great Rabbi Isaac Luria (aka the ARI) had been resurrected, giving Della Reina again the chance to "force the Messiah", which could cause great havoc and destruction.

Pollack, Rachel. "The Cup of Knowing" Doom Patrol #86 Jan. 1995 (NY : DC).
The Doom Patrol superhero group try to save Rabbi Goldbaum from a rampaging golem, not realizing that Rabbi Golbaum is actually Della Reina and that he had brought the golem to life. While the Doom Patrol is occupied in battle, Della Reina travels to the Doom Patrol's headquarters, where he attains the final cup of dreams after shattering the head of a clone of Niles Caulder.

Pollack, Rachel. "A Cry for the Great Face" Doom Patrol #87 Feb. 1995 (NY : DC).
Dorothy's doll (Charlie) reveals itself to be the vessel for the ARI's spirit. Della Reina begins his "healing" of the world, which has terrible consequence because the world is too weak for the healing light. The Doom Patrol and Reb Chaim enter Della Reina's dream via the bottom sphere of the tree of life and defeat Della Reina. To do so, they each take one of the 7 cups of dreams and bring them together.