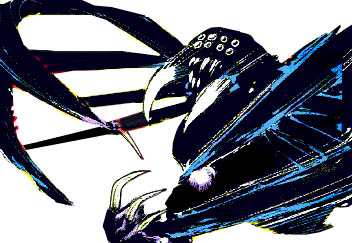 The Religious Affiliation of
Zoroaster

Diabolique was a human-demon hybrid who had powerful magical abilities. She used her powers to magically enhance a normal spider and transform it into a monstrous spider with tremendous size and strength. Curiously enough, she called the enhanced spider "Zoroaster." She used the spider to attack the demonic hero known as Vengeance.

Zoroaster is, of course, the founder and principle prophet of the Zoroastrian religion. It isn't really clear why the demonness Diabolique applied this name to her spider. Perhaps a careful reading of the stories in which Diabolique and Zoroaster appear would reveal subtle Zoroastrian themes. Or perhaps writer Chris Cooper simply thought the name sounded cool. Further research on this topic should be done.

The spider itself, being merely a spider, can't really be classified as a "Zoroastrian" character. It is simply a character with an overtly Zoroastrian name.

As a normal spider which has been magically enhanced, Zoroaster can be classified as a "mutated animal." Classification with regards to religious affiliation is thus "not applicable." From what we can tell, Zoroaster doesn't really qualify as an "uplifted animals" because its enhancements did not bestow it with sentience or even additional intelligence. Even in its enhanced state it remained a simplistic animal which was used as a weapon by Diabolique.

Even Zoroaster's gender is unknown. Because it began as a regular terrestrial spider, it would have been a male or female. But its actual gender was never revealed, nor is it important. Zoroaster, the historical prophet this spider was named for, was male. But if Diabolique was willing to apply a Zoroastrian name to a non-Zoroastrian spider, she may just as readily have been willing to apply a male name to a female spider.