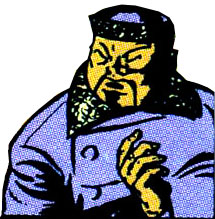 The Religious Affiliation of
Mayor Wong

Bruce Wayne (Batman) told his ward Dick Grayson (Robin) about his friend on page 3 of the story retroactively titled "The Horde of the Green Dragon." Dick noticed that an ad had been placed in the newspaper, an ad set in Chinese-style text. The ad read, "Batman: A friend needs your help. Come at once!"

Robin observed, "The type was set in Chinese style. The sender did it purposely!"

Bruce Wayne replied, "Yes, to let me know he was Chinese! A friend of course, Wong of Chinatown! He helped me in the case of the ruby idol."

Later Batman visited Wong, who was described in a narrative caption: "Wong - unofficial mayor of Chinatown -- a wise, honorable man."

Batman always referred to Wong simply by his name (even when speaking directly to the man), and not as "Mayor Wong." This is probably because Wong was not officially a mayor. Gotham's Chinatown is like many "Chinatowns" in big cities throughout the United States (and other countries): a small geographic location, and not an actual official municipality.

Suggested links for further research about this character and the character's religious affiliation:
- http://www.adherents.com/lit/comics/DetectiveComics_39.html
- https://www.comics.org/issue/798/
- http://comicbookdb.com/issue.php?ID=34493