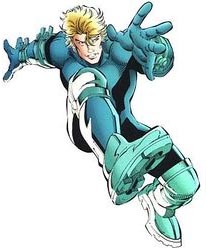 Risk Quick Bio: The H'San Natall race produced alien/human hybrids that would be activated with super-human powers on their 16th birthdays. On that day, Cody 'Risky' Driscoll learned he had fives times the speed, strength and stamina of an average 16 year old. Now dubbed Risk, daredevil Cody joined the Teen Titans. Risk became furious at the world after losing his right arm in battle - prompting the teen thrill-seeker to embark on a life of crime.

Raised in the Colorado community of Cosmos, Cody has lived alone with his mother in one of the worst trailer parks. His father died when he was just six months old. His mother has had two husbands since, so it hasn't been easy for Cody.

On his sixteenth birthday, Cody starting to develop super-human abilities, including enhanced speed, strength and dexterity. Cody, although an above average student, was always a bit of a thrill junkie and trouble maker. He made a hobby out of rebelling against authority. It was during one such stunt, sneaking into the government facility known as NORAD, that Cody was teleported away.

Awakening on the alien ship of the dreaded H'San Natall, Cody met other super-powered teenagers in the same situation. Together, they rescued another meta-human teenaged girl who was raised in a virtual-reality simulator program. The group of teenagers escaped the aliens and returned to earth, where they found safe haven with the wealthy Loren Jupiter and his enigmatic associate, Omen.

During the adventure, the teens learned that they were half-alien, and their mothers were impregnated by the H'San Natall years ago. All born on June 21st, the kids were part of a sleeper agent program by the H'San Natall to defeat the super-powered beings already on Earth. The group stayed together, and with the funding of Loren Jupiter, became the newest incarnation of the Teen Titans. The heat-generating Isaiah Crockett became Joto; Toni Monetti's silver plasma powers earned her the codename, Argent; With enhanced speed and strength, Cody Driscoll took the nickname, Risk; And the alien girl who could absorb and project light adopted the name, Prysm. Atom decided to remain on the team to learn how to readjust to his life as a teenager, since he was de-aged by Extant during the Zero Hour Crisis.

Fellow teammate Prysm developed a crush on Cody, although he seemed more interested in pursuing Argent at the time.

After a battle with Haze, fellow teammate Joto seemingly died, leaving the team devastated. The group almost broke up after Joto's ‘death', and Argent was instrumental in initiating a membership drive to keep the Titans together - with new members Fringe and Captain Marvel Jr. joining as well.

After another altercation with the H'San Natall and The Veil, The team discovered that Joto was indeed alive. They rescued him, and Prysm and Fringe elected to remain in space. As Risk said goodbye to Prysm, he told her he loved her. The rest of the team decided to go their separate ways and disbanded. Risk returned to Colorado to resume living with his mother.

Risk aided the Titans again during the Technis Imperative conflict, which involved the Justice League as well as all Titans, past and present. The two teams eventually worked together to save the earth and former Titans teammate, Cyborg.

There were some reports that Risk had become a petty criminal, but these rumors appear to be unfounded; Risk was later spotted assisting Young Justice with their assault on Zandia.

When Superboy from Earth Prime ran amok during the Infinite Crisis, Superboy called on his Titans allies to subdue his Kryptonian doppelganger. The misguided Superboy-Prime slaughtered several Titans and ripped off Risk's right arm, before being pulled into the Speed Force by the combined might of the super-speedsters.

Furious at the world, Risk began to seek thrills by commiting petty crimes while living in his ramshackle trailer in Colorado. Feeling abandoned by the Titans, Risk was later recruited by Deathstroke to become a member of his Titans East team.

In TITANS SECRET FILES #2 (2000), there is a double page spread illustrating a 'TITANS: Where are they now?' A criminal organization called the 1,000 did a data search of the Titans, it located all Titans, dead and alive. The results of Risk's search indicated he is now a petty thief on the run.

Teen Titans #1-3 [1996]: Three teenagers are kidnapped by the alien H'San Natall and joined by a fourth, as well as by the Atom. Dubbed Argent, Joto, Prysm, and Risk, these teenagers are taken in by Loren Jupiter and the mysterious Omen and become the new Teen Titans. First Atom as a Teen Titan in issue #1. First appearances of Argent, Risk, Joto and Prysm in issue #1.

Teen Titans #21-24 [1998] Four-Part "Titans Hunt": The final TITANS storyline by writer/artist Dan Jurgens. Deathstroke hunts the Titans and delivers them to the H'San Natall. Once there, Prysm discovers her mother, known as Queen Miraset, is alive and living among the H'San Natall. Prysm also meets her father, Ch'ah, who has a glasslike appearance similar to Prysm. Pylon reveals the H'San Natall used a group called the Veil as a front for their objectives. On the outside, the Veil was an organization with one objective: Eliminate all alien influence from the planet earth. In actuality, its leader Pylon was a member of the H'San Natall. The Titans and Superman are able to talk to H'San Natall out of any further acts of aggression. The team also discovers that Joto is alive! They rescue him, but Prysm and Fringe elect to remain in space. The rest of the team return to earth but decide to go their separate ways and disband.

Titans Secret Files #2 [2000]: There is a double page spread illustrating a 'TITANS: Where are they now?' A criminal organization called the 1,000 did a data search of the Titans, it located all Titans, dead and alive. The results of Risk's search indicated he is now a petty thief on the run.

Infinite Crisis #4 [2005] & Teen Titans #32 [2005]: Superboy-Prime attacks Superboy. Superboy calls on his Titans allies to subdue his Kryptonian doppelganger. The misguided Superboy-Prime inadvertently decapitates Pantha and slaughters Baby Wildebeest and Bushido; He then freezes Red Star into crystal ice and rips off Risk's right arm before being pulled into the Speed Force by the combined might of the super-speedsters. Death of Pantha, Baby Wildebeest and Bushido.

Teen Titans #38 [2006]: A downtrodden Cody Driscoll commits petty crimes while living in his ramshackle trailer in Colorado. Furious at the loss of his arm, Cody is approached by Deathstroke to join his Titans East team.

RISK: "Cody Driscoll is loose, flamboyant and bored stiff by school and other aspects of everyday life. And he's hyper, in the truest sense of the word. His abilities are increased over those of the average person by a multiple of five: five times the speed, five times the strength and five times the ability to get into trouble. I could see him emerging as the real star of the book, and he's certainly a character who is very different from the Atom, which should prove interesting."