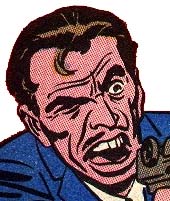 The Religious Affiliation of
Heinz Kruger

Heinz Kruger is the Nazi saboteur who killed Professor Erskine and thus caused the Super Soldier formula to lost. (Erskine had the formula memorized, but had not written it down, lest it fall into the wrong hands.) Because of what Heinz Kruger did, Steve Rogers was the only U.S. soldier to successfully be given Prof. Erskine's Super Soldier treatment. Rogers thus became Captain America.

Although this Nazi saboteur appeared in the very first Captain America story, written by Joe Simon, with art by Jack Kirby and Al Liederman, this character was actually named until many years later when Stan Lee wrote a re-telling of Captain America's origin story. So it was Stan Lee who actually named Kruger, but it was Simon, Kirby and Liederman who created the character. 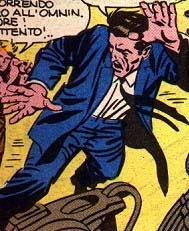 This character is in the following 14 stories which have been indexed by this website: