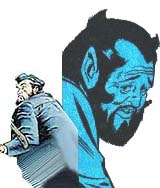 The Religious Affiliation of
Abel

For decades, Cain and Abel were the respective "hosts" of the EC-style horror comic anthologies House of Mystery and House of Secrets. Appeared in 11 issues of Sandman, 1989-1995. Based on Abel described in the Old Testament. Ambiguity about whether he is same person.

Many years after DC Comics began using Abel as a major character in their House of Mystery series and Vertigo line, Marvel Comics introduced a version of Abel which was an homage or parody of DC's version. Marvel's Abel is also apparently the Biblical legend, the son of Adam and Eve, killed by his brother Cain, but somehow survived through the ages, reincarnated or brought back to life. Abel is at the "Boarding House of Mystery" (an obvious parody of DC's "House of Mystery"). This Abel has severe mental limitations due to a rock embedded in his head, a condition that hearkens back to the Biblical story of Cain killing his brother Abel.

Marvel's version of Abel is essentially the same character as the DC version, so we have combined them into a single record. Marvel's Abel first appeared in Howard the Duck (vol. 3) #4 (June 2002), written by Steve Gerber with art by Phil Winslade. Marvel's Abel apparently appeared only in this story and the subsequent issue, Howard the Duck (vol. 3) #5.

The House of Secrets