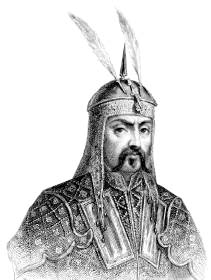 Earliest Appearance Listed in This Database: Leading Comics #3 (Summer 1942): "The Tyrants of Time!"

Genghis Khan is such an interesting and colorful figure from world history that he has been portrayed dozens of times in popular culture, including films, books, and comics.

One depiction of Genghis Khan that expanded quite a bit upon the character's actual history was created by Wm. Joseph Warner for I.C.E. Studios/Worldwinz Studios. Warner used the existing real-world history of Genghis Khan as the initial origin of a comic book villain named "Master Midnight," but imagined a fantastic history for the character past his actual history. This Genghis Khan ended up going to Egypt where he obtained magical power from sources associated with Egyptian classical religion. He eventually became known by a number of names, including Yang Chi, Lord Voltus, and The Conqueror.

The official website for these characters describes the history of "Master Midnight":

Master Midnight was born Temujin, a slave in ancient Mongolia. Temjuin rose from the ranks of slavery and became known as the man that very nearly conquered the planet, Genghis Khan. When Genghis Khan became too old and weak to lead his people, rather than die at the hands of his sons, he exiled himself into the deserts of Egypt to die alone. After weeks of wandering aimlessly through the searing heat and blistering winds of the desert, Khan happened upon a golden pyramid. The pyramid was inhabited by the Brotherhood of Light, half mortal children of the Egyptian god Osiris.

There he met and befriended Seth Amun Ra, grandson of the Egyptian sun god Ra. Seth nursed khan back to health and began to teach him the ways of the Brotherhood. He also taught him of the secrets of their sustained immortality, the Well of Ra. Every 1000 years, the members of the Brotherhood would have to drink from the well, else they would die and their power and knowledge would pass on to the nearest living thing. Khan asked what would happen if a normal human drank from the well. Seth explained that the human would live indefinitely.

Khan then formed a plan to once again become master of the world. Using his friendship with Seth, he tricked him into leaving the temple on a mission of mercy to his former village in the mountains of Mongolia. During his absence, Khan drank from the well and then destroyed it.

The remaining members of the Brotherhood, now unable to take their 1000 year drink from the well, disintegrated and their powers and knowledge passed to Khan, making him even more powerful and restored much of his youthful appearance. Khan then proceeded to destroy the temple and left it in ruins. Weeks had passed before Seth returned to the temple, finding that his brethren had been killed and that Khan had vanished. Seth swore to hunt Khan and exact revenge for his betrayal, Seth then became known as the immortal superhero, Brother Power.

In panel 3 on page 3 in Superman #167 (Feb. 1964), Lex Luthor is in his secret lair when he walks by a display of four statues of his heroes: Atilla the Hun, Genghis Khan, Captain Kidd an Al Capone. Luthor thinks, "My heroes . . . the greatest marauders of the ages! I dreamed of being as great as they and I would be, if Superman didn't always stop me!"