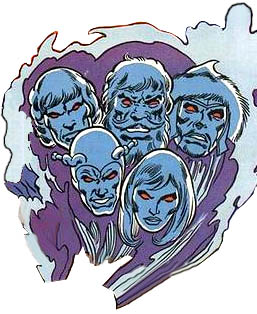 Name: The Fiend with Five Faces

Other Names: Tangora the Wise, Ku the War-God, Mauri the Love-Goddess, Tane the Nature-God, Rongo the Jester

Enemy of: The Justice League

Gender: both male and female

Note: 5 merged ancient gods of Oceania from 70,000 years ago

Suggested links for further research about this character and the character's religious affiliation:
- http://www.cosmicteams.com/obscure/f.htm
- https://www.comics.org/issue/32393/