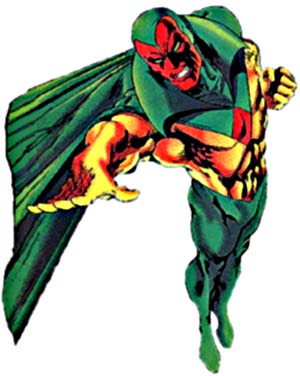 The Religious Affiliation of
Vision

...Probably the best comic you could find to figure out who believes in a God or a god, or has deep faith in God or a god would be:

The Goddess uses the heroes' faith and belief in gods and such to recruit heroes.

The so-called "non-believers" that the Goddess didn't choose:
Vision
Mr. Fantastic
Thing
She-Hulk
Rage
Hulk
Iron Man
Spider-Woman II
Firestar
Darkhawk
Beast (although Beast claims to believe in a god, but Vision counters with "Obviously because your belief in a supreme being is not as deeply felt nor well known as the others.")
Quasar (which was stated in his own book)

Hawkeye is Catholic. Remembering his mini-series, when he was pretending to be dead his had a Catholic funeral (if memory serves me right). Kingpin was portrayed as Catholic (link to the whole mafia thing) in early DD. Vision also played with the whole religious-Catholic thing at one point.

Great characters and although the press has been bad lately - Great Religion.

This character is in the following 314 stories which have been indexed by this website: