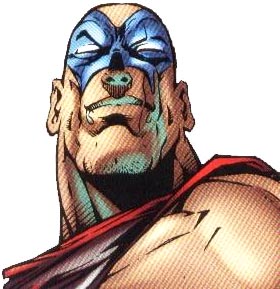 The Religious Affiliation of
Baal of the Crimson Sands
Baal

Religion: survival of the fittest

Name: Baal of the Crimson Sands

Baal... was the leader of the Sandstormers who found Apocalypse as a baby and raised him... the Sandstormers [were a group of] raiders and scavengers in ancient Egypt who lived by the dogma of survival of the fittest. When Kang the Conqueror went back in time, in his spaceship, the Sphinx and crash landed, he was found by the Sandstormers. Inside, Baal and his people found a wounded Kang, and nursed him back to health. When Kang recovered, he ran away and became pharoah of Egypt as Rama Tut. He returned with soldiers to reclaim his jewel, which the Sandstormers had stolen. The Sandstormers did not reveal where it was and many of Baal's men were massacred...

The jewel, "The Eye of the Ages" gives its holders glimpses into the future and Baal saw in it a man who would defeat him, this man was En Sabah Nur. The Sandstormers raided village after village in search for Nur and finally found him left to die on an altar of stones. Many of the Sandstormers wished to slay the baby, thinking it a demon. From the moment Baal had found Nur, he was attached to him and slayed even his own men to defend him.

Years passed and En Sabah Nur turned seventeen and proved to his clan how strong he was. Rama Tut had grown tired in search of these Raiders. Logos, Rama Tut's vizier had revealed the Sandstormers lair and soon they were all massacred. Luckily, Baal had gone off with Nur to reveal to him his destiny and how he had come to learn of it. They were underneath the battle between the Egyptian forces and the Sandstormers which led to a cave-in where they were. Father and son had both become severely injured, but Baal managed to stay alive long enough to reveal to En Sabah Nur how Rama Tut appeared in Egypt and all that had transpired between them.

From: Jeff Christiansen, "Master List: Baa-Bak", 5 April 2008 on The Appendix to the Handbook of the Marvel Universe website (http://www.marvunapp.com/master/baabak.htm; viewed 28 July 2008):

3000 B.C. Leader of Sandstormers (a band of desert raiders). Rescued and raised Apocalypse. Trained him to live by survival of the fittest. Believed him to be the prophesied conqueror. Explained that Rama-Tut was not a god. Led him to Rama-Tut's ship. Died helping him escape Rama-Tut.