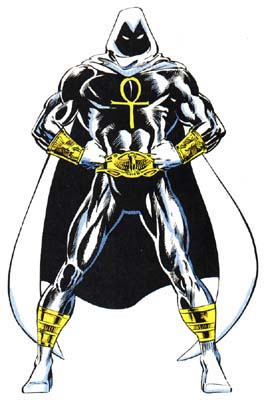 BELOW: Luke Cage makes a good-natured joke with Moon Knight about the Ku Klux Klan: The white costume and hood worn by the fellow super-hero Moon Knight apparently reminds race-conscious Luke Cage of the Ku Klux Klan. Cage makes a good-natured joke about the Klan with his future teammate. Cage tells him: "Guys in white hoods aren't exactly welcome in Harlem." This character is in the following 293 stories which have been indexed by this website:

Vengeance of the Moon Knight