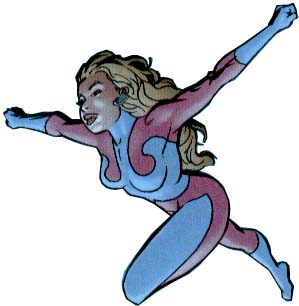 But Windfall may have never been truly evil at heart. In the second encounter between the Outsiders and the Masters of Disaster, Windfall saved the life of Outsiders member Halo, despite being ordered by her team's leader (and her sister) New Wave to let Halo die.

This incident led to Windfall leaving the Masters of Disaster before long. She later helped out the Outsiders and even joined the team.

Windfall only remained with the Outsiders briefly, however, before resigning and returning to college. While attending college, Windfall attended a party a fraternity house at which members of the fraternity drugged her and raped her. She retaliated by using her wind powers against them. Windfall was arrested for asphyxiating her rapists, and she ended up recruited by Amanda Waller to join the Suicide Squad, a team of super-powered beings who worked for the U.S. government. This was essentially a super-heroic team, but it was comprised of super-villains or former super-villains who were coerced into joining the team in exchange for gaining some freedom and some measure of forgiveness for their past crimes.

Windfall was killed by Chemo during a Suicide Squad mission.

This character is in the following 30 stories which have been indexed by this website:

Adventures of the Outsiders