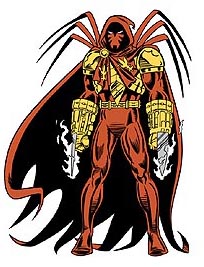 Note: temporarily filled in as Batman

Recently there was an inquiry on r.a.c. about Jewish Superheroes... I have been following many different Marvel titles for a long long time. In this time I have really only encountered two genuine examples of Christian Superheroes, though one may be more technically termed a vigilante.

I submit that there are characters who hold to certain Christian faiths, but none but two who stand out as having their faith as the source of their power...

So given the above examples of La Espirita and The Crusader, are there any other Christian superheroes who actual powers are based on their religious beliefs in any other superhero books (even those outside of Marvel)?

...The recently introduced character Azrael has strong Church associations, coming from an Order that was supposed to be an offshoot of the Templars...

To keep this on topic (sorta), why are most heroes not as religious as they could be? ...it seems that most of the religious people in comics are the VILLAINS, and are presented as nut-cases... However, the only really religious person that's sane that I recall in DCU is Huntress, and I guess Wonder Woman... Anyone else...?

Azrael/Jean Paul Valley? The order of St. Dumas seems to have been a Christian sect although what he believes in now is unspecified he's probably some sort of Christian.

We all know Catwoman/Selina Kyle is Catholic (and a bad one at that). The Huntress is probably Catholic too... Any other characters have religious convictions?

Well Azrael seems to think he works for God half the time, so that might qualify.

...I'd guess that Jean Paul Valley is Catholic. The Order of Dumas broke away from The Knights Templar, a Catholic order. So unless they became a new sect of Christianity I'd say they are still Catholic.

Where have you seen Christianity professed by comic characters?

Azrael (temporary successor of Batman) was a die hard Christian, but was raised in what most people would call a "crizzity crizzazy cult."

I was never sure if he was a believer or just warped. Those crazy St. Dumas folks. It was be a sweet storyline if Nightwing built him up in the faith as he sought to overcome the last influences of the cult.

That would be an awesome storyline. Azrael always intrigued me, but he was raised in a rather warped "denomination", if you will.

One presumes that most authors would rather avoid religious references in order to prevent offense to any parties; early PC, so to speak.

That said, there's Azrael, [the] guy who replaced Batman during the 'Knightfall' story arc, IIRC -- a monk of the Order of St. Dumas. That would make him distinctly Catholic. Not sure about any others, though...

Well, IIRC [if I recall correctly], the order of St. Dumas was a section of the Knights Templar, (which were deemed heretics for various interesting reasons) and he took the form of an avenging angel, and lots of things about that sect seemed away from the Catholic norm.

Plus it's not like he showed he still believed it beyond subliminal conditioning, AFAIK. He harbored a bit of a grudge against them, and that might make him disbelieve (godless knows there's lots of ex-Catholics like that)...

You know, I don't like too much overly obvious religious references in my comics nor do I like political ones because I read comics as an escape. But I do appreciate appropriate mentions...

As far as "well adjusted agnostic/atheistic character" goes, much the same can be said about the deeply religious ones. A character who is shown to be devoutly religious can be put in a story where he/she is manipulated by dark forces within that religion. Kind of like Azrael from Batman. I would like casual mentions without overt preachiness, but only when it's appropriate, such as a Thanksgiving story or Christmas story or some such.

Does anyone know if there are any DC Comics characters who are portrayed as being Christian or Catholic in religion?

Azrael is a psycho who really believes in some demented form of something.

Heh. The Angel of the Bat storyline might have made an interesting way for the return of Azrael, (who went by Agent of the Bat for awhile I think), and even the former Supergirl Linda Danvers, who was once an angel herself.

I'm not a fan of this idea, but it would have been better than the current LOA crap we're getting.

And yes, I would definitely say it is a much better Azrael plot than Batgirl.

I kinda agree with black alice in that this has been done with Azrael, and Supergirl. I don't think you could do comics involving religion because it becomes to controversial, and takes away from the character and the story. Besides Cass wanted the mantle of the Bat, and I don't think religion and crime-fighting go to well together, anyone read about the crusades?

If you are a comic geek then you probably already know that Nightcrawler is Catholic and Kitty Pryde is Jewish but what about The Hulk? Or over at the competition you can't miss that Azrael is Catholic but what about the new Green Arrow?

Like real people some comic book characters are very open about their religions and some aren't. For regular day to day interactions it probably doesn't make much of a difference but once in a while, like around holidays, or when you are facing supernatural evil, it's helpful to know their beliefs.

It's especially helpful if you plan on writing about any of them. A person's religion influences a lot more than where they are going to be Sunday morning.

This page features a handy table of characters and their religious affiliations sorted by religion. If you click on the religion listed it will take you to an article with the supporting documentation as well as some nice illustrations of the characters. Clicking on the religions listed at the top of the page takes you to the section of the table for that religion.

This is a work in progress and they welcome input from readers. The list is heavy on DC and Marvel characters but there are characters from other publishers, including manga, although there aren't that many manga characters. If a favorite character isn't on the list and you can make a case for a particular affiliation by all means feel free to email them with your information.

I assumed [that in Batman #666], the other Batman that Damien kills is Azrael, with the reference to replacing his father and stuff like that. The religious stuff fits too.

Azrael is a good guy, though (the angel, not the character) if you want to go by the religious subtexts. He was the angel of death, but under command of God, who probably wouldn't want death and anarchy running rampant over Gotham. And does the DC character have any reason to turn bad or go crazy? I don't think it'd come out of nowhere like that, unless we get some backstory this next arc.