BELOW: Aunt May thought Mac Gargan (the Scorpion) was a Jehovah's Witness: Spider-Man consulted with powerful telepath Rachel Summers ("Marvel Girl" of the X-Men) to help him find his Aunt May, who was abducted by unknown villain. Touching a ring that belonged to Aunt May, Rachel was able to receive psychic impressions of the abduction. Rachel could not identify who the assailant was. But she did reveal that when Aunt May answered the door, she thought the person at the door was a Jehovah's Witness coming to preach about the Bible. It is worth noting that Aunt May left the chain on the door (meaning that she had not planned to let the Jehovah's Witness in), but she opened the door, no doubt intending to politely decline his invitation to visit with her. 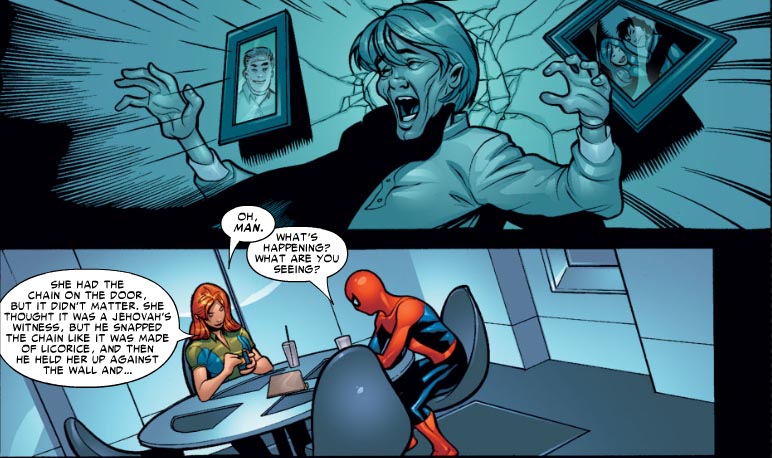 BELOW: Red points out that terrorist Ranko Zamani is Serbian Orthodox, so he wouldn't have a tattoo.

Raymond Reddington: "I need you to tell me what Zamani said... In the house, what did he say? What did you see?"

Agent Elizabeth Keen: "He, uh, asked about the Chemist, about the girl..."

Raymond Reddington: "No. What did you see?"

[Agent Keen probes her memories. She recalls seeing something on the back of Zamani's hand - a mark, a symbol.]

Agent Elizabeth Keen: "There was a tattoo."

Raymond Reddington: "He's Serbian Orthodox. He wouldn't have a tattoo."

Agent Elizabeth Keen: "I know what I saw. This mark, I've seen it before."

[Agent Keen probes her memories further. She recalls seeing the symbol somewhere else - on a pamphlet for the D.C. zoo. It is a symbol used for the zoo.]

Agent Elizabeth Keen: "It wasn't a tattoo. It was a stamp. Zamani's gonna bomb the D.C. zoo."

BELOW: Radical Muslim "soldiers" invading an Afghani village are overtly identified as members of the fundamentalist Islamic militia group known as the "Taliban.": 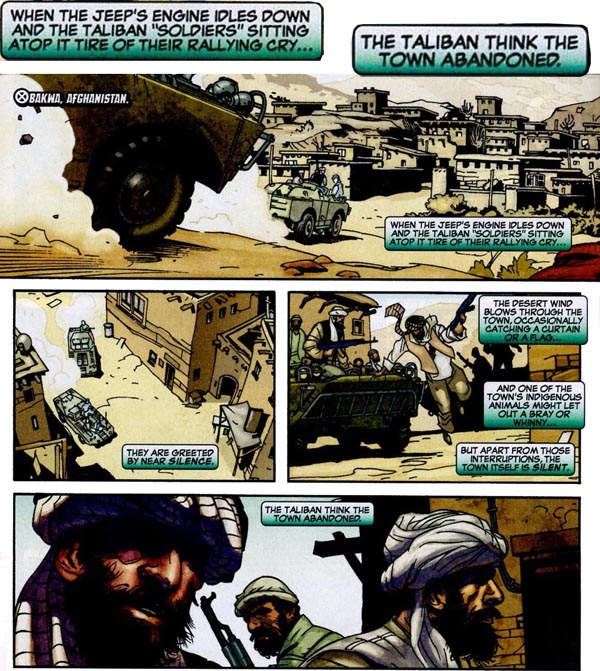 BELOW: Defense Department official Ozzie Bright (actually a Chitauri spy) compares the current situation to when the Allies broke the Nazis' Enigma code, but did not act on everything they learned from this breakthrough:

"I'll ask you to indulge me in a little historical parallel," Bright went on. "During World War II, hard decisions were made about utilizing certain technologies and acting on the information gained thereby. Had the Allies saved every life and thwarted every minor movement they learned about by cracking the Enigma code, the Nazis would quickly have abandoned Enigma; by sacrificing those necessary lives, the Allies maintained their intelligence superiority over the Nazis long enough for the advantage to prove decisive. Do you understand the analogy, General Fury?"