Title: “That Old Gang of Mine”

11 characters in this story:

Timecode: 5 minutes, 47 seconds: A scene in the Daily Planet offices, in which Perry White talks to Lois and Clark, ends. As the scene ends, we hear the voice of an unfamiliar man talking on the phone. He is talking about Elvis Presley: "That's right. He's a dead ringer for Elvis." Appropriately enough, these words are heard during a close-up on Elvis Presley worshipper Perry White.

BELOW: He's a dead ringer for Elvis: 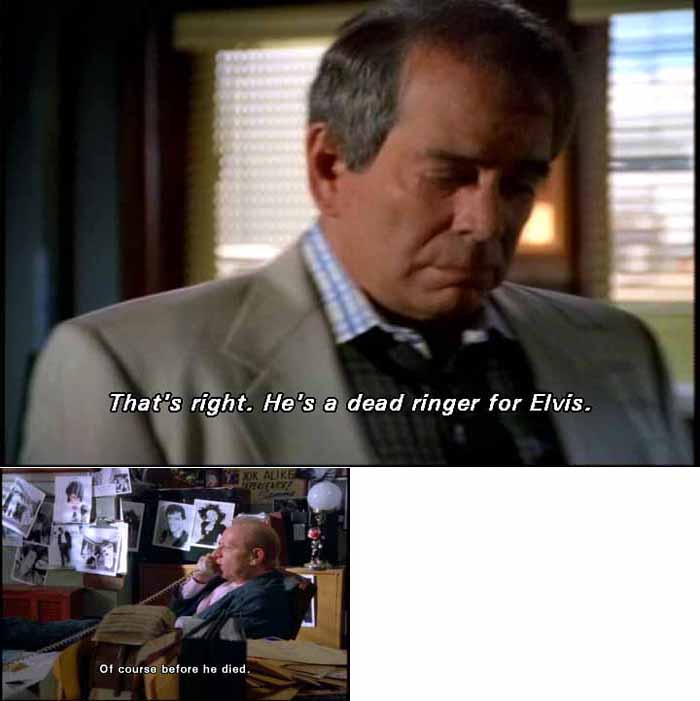 Then we visually cut to see the man saying these words. He is an agent who runs a celebrity look-alike agency. On the wall of his office we see caricature drawings and photos of famous people: Elvis Presley, Marilyn Monroe, Prince, and more.

Sammy: That's right. He's a dead ringer for Elvis . . . Of course before he died.

[The door chime is heard. Lois Lane and Clark Kent enter the office. Sammy, the agent, looks up from his phone conversation to briefly address Lois and Clark.]

Sammy: Have a seat folks. I'll be right with you.

[Lois and Clark have come to this look-alike agency to try to track down the man and woman who stole an antique care from Perry White's garage. Perry reported that the pair looked and sounded like Bonnie and Clyde Barrow, the famous outlaws. Perry, Lois, and Clark all think that the car was stolen by impersonators. They do not yet realize that Perry was robbed by the real Bonnie and Clyde, resurrected as clones by scientist Emil Hamilton. Actually, these people might not technically be clones. Jimmy the snitch later tells Lois and Clark that these people were "regenerated." Emil Hamilton himself later tells Lois Lane that he "regenerated" criminals, but he does so in a vat. Perhaps Professor Hamilton succeeded in resurrecting these criminals rather than cloning them, but the process, which involves vats as well as digging up the bodies of the original criminals, seems to be an unclear mix of cloning and Frankenstein-like regeneration.]

[Perry White looks up at the man. Perry White thinks that he, like Bonnie and Clyde who stole his care, are regular contemporary people who are impersonating famous mobsters. But Bonnie and Clyde, along with Al Capone and John Dillinger are genuine clones of these long-dead mobsters who have all the the memories and personalities of the people they are cloned from.]

BELOW: Perry White is shocked then a visitor to his office does not know who Elvis Presley is: 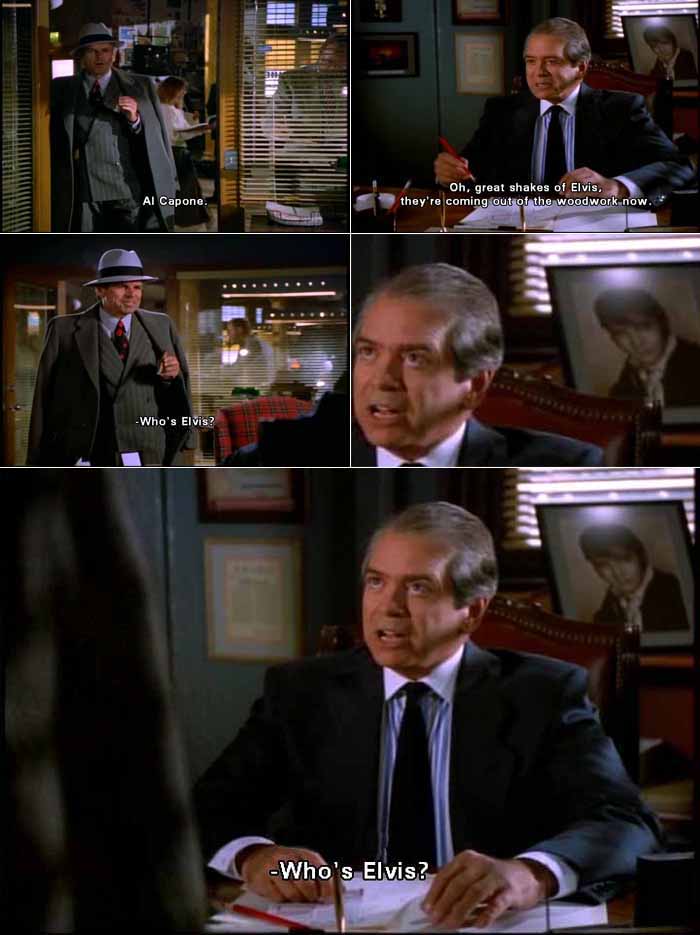 Perry White: Oh, great shades of Elvis, they're coming out of the woodwork now.

[Perry White is an Elvis Presley worshipper and he curses in the name of Elvis. While he says this line, which is something of a catch phrase, note that we can see a framed photo of Elvis Presley over Perry's left shoulder.

[Oddly enough, the subtitles for this line read: "Oh, great shakes of Elvis..." During the delivery of tihs line, it does indeed sound like Perry White is saying "shakes", but based on the many previous episodes of this series, it is clear that what was written in the script, and what the actor intended to say, was "shades."]

[Perry is indignant that someone would feign ignorance of the King. It is like an American telling a devout Christian that they have never heard of Jesus.]

Perry White: Look, pal, I don' t know what kind of charade you're pulling here, but--

While investigating their story, Lois Lane and Clark Kent go undercover as patrons of an illegal gambling establishment. Al Capone shows up with his gang. One of them threatens Lois Lane, prompting Clark to try to intervene. Unfortunately, one of Capone's henchmen shoots Clark. Clark falls down, as if he were dead. He isn't really hurt, but he pretends to be dead so that his secret identity as Superman will not be revealed. Capone's men dispose of the "body." Lois Lane, Perry White, and Jimmy Olsen all think that Clark Kent is dead.

Later, we see Clark visiting his parents on their farm in Smallville. Timecode: 29 minutes, 29 seconds:

BELOW: Clark Kent talks with his parents in a very Mormonesque food storage room in their Kansas farmhouse: 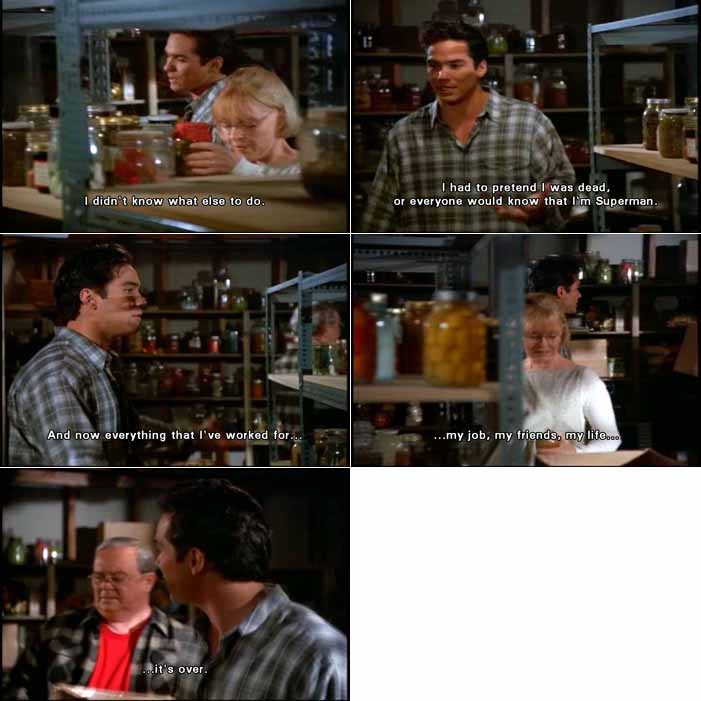 Clark Kent: I didn't know what else to do. I had to pretend I was dead, or everyone would know that I'm Superman. And now everything that I've worked for . . . my job, my friends, my life . . . it's over.

Martha Kent: Mr. White called while you were in the shower.

Clark Kent: Did he say anything about Lois?

Martha Kent: He said that she was taking it really hard.

Clark Kent: I guess that should make me feel a little better . . . but it doesn't. I wish I could be there for her.

Jonathan Kent: Clark, you can. As Superman.

Clark Kent: Dad, Superman doesn't work at the Daily Planet. He doesn't go to ball games with Jimmy and Perry. He doesn't listen to Lois go off on some weird tangent and secretly love it.

During this conversation, Clark's parents are shelving jars of fruit in what looks like a traditional food storage room belonging to members of the Church of Jesus Christ of Latter-day Saints (i.e., Mormons). Although there are a number of Mormon-esque elements in the Lois & Clark series as a whole, the Kent family was not intentionally portrayed as Latter-day Saints. There is no real reason to believe that the creators of this series intended for the Kent family to be anything other than what they are portrayed as in the comics: Methodists. Of course, there is no Methodist tradition of maintaining food storage like there is among Latter-day Saints. But the food storage room in this scene is probably just meant to be a food storage room on a rural Kansas farm.

Timecode: 33 minutes, 33 seconds: Lois Lane has snuck into Professor Emil Hamilton's lab. Professor Hamilton was being held prisoner by his own criminal creations. Lois was caught by Al Capones henchmen. Now Capone arrives on the scene.

Al Capone: Well, well, well. The little lady in red from the casino. You know, I locked the professor up in the lab for a reason, toots. The morals of this country have absolutely gone to pot.

BELOW: Gangster Al Capone: The morals of this country have absolutely gone to pot: 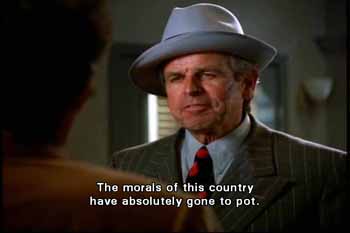 [This line is intended to be ironic, delivered as it is by a ruthless gangster.]

After everything is over and Professor Emil Hamilton's regenerated criminals have been apprehended by Superman and turned over to the police, Professor Hamilton approaches Lois and Clark. Professor Hamilton seems very happy, despite the fact that he is covered with ash and grime. Timecode: 43 minutes, 7 seconds:

Professor Emil Hamilton: I burned up my lab. I destroyed all my research. I realized that playing around with life and death . . . those are things best left to nature.

BELOW: Professor Emil Hamilton: I realized that playing around with life and death... those are things best left to nature. 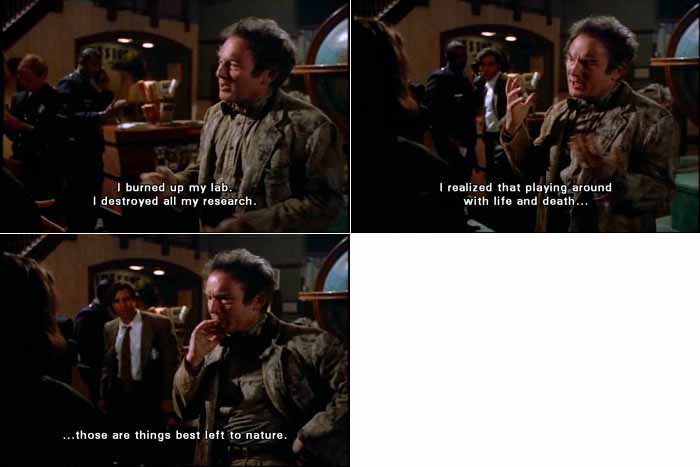 Detective Wolfe: Professor Hamilton, if you don't mind, I'd like to ask you a few questions. Actually, a lot of questions.

Professor Emil Hamilton: As long as it's not about DNA.

Lois Lane: [addressing the detective] You're not pressing charges against him, are you?

Detective Wolfe: For an error in judgment? I don't think so. If you'll excuse me, I have to get back downtown. Seems as if Dillinger's already got himself a lawyer and he's willin to testify against Capone. [pointing to Clark] Oh, by the way, you're my first homicide case that ever solved itself.

[Clark told everybody that Superman froze his body with his super breath and then used Professor Hamilton's equipment and technique to bring him (Clark) back from the brink of death after he was shot by Capone's henchman.]