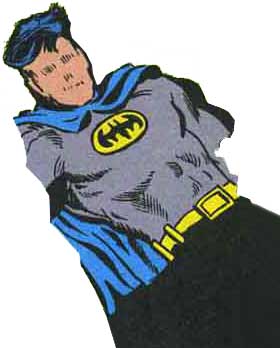 The Religious Affiliation of
Jerry Randall

Enemy of: The Joker

Jerry Randall was a book store owner who was a major character in Batman #294. Randall routinely dressed up as Batman and went to places where Batman had fought crime. Jerry in this small way would recreate Batman's exploits because he so admired the masked crimefighter.

Unfortunately for Jerry, one night when he went to a fur warehouse dressed as Batman, he ran into the Joker, who had been unable to finish robbing the place the night before. The Joker mistook Jerry Randall for the real Batman and attacked him. Jerry was easily defeated and killed by the Joker.

In panel 8 on page 15, the sign on Jerry Randall's bookstore (located on Fourth Street in downtown Gotham City) is obscured by a narrative caption. The letters "THE BOOKMA" are clearly readable. At least two letters come after this part of the sign's name. Both letters are mostly obscured, but the bottom can be seen of both letters. Our best guess is that these two letters are both capital N's, and that the name of Jerry's store is "The Bookmann." This may seem like a peculiar name. Perhaps "Bookmart" would be a more common name for a book store. But the obscured letters look more like they are "NN" rather than "RT." The store name "Bookmann" may be a play on the name of Jerry Randall's idol: The Batman. 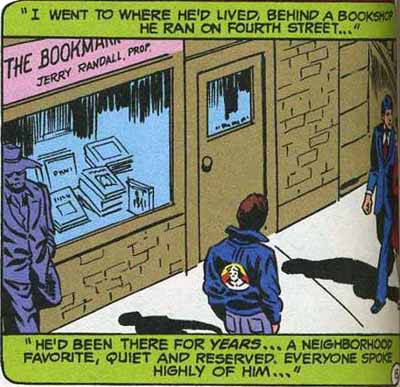 Suggested links for further research about this character and the character's religious affiliation:
- https://www.comics.org/issue/31690/
- http://comicbookdb.com/issue.php?ID=72606