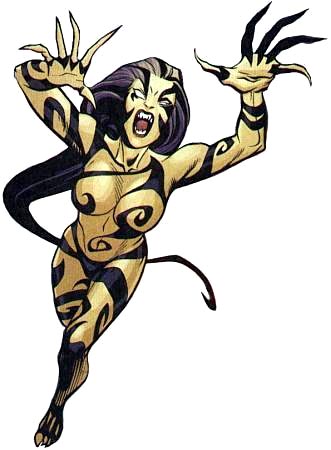 The Religious Affiliation of
Carnivora

Note: was part of invasion force that crashed en route to Earth

Carnivora is an alien who came to Earth's solar system as part of an alien invasion force. It has been speculated that she was part of a scouting party that met disaster when it crashed into a meteor or asteroid. Carnivora managed to come to Earth alive, where she embarked on a career as a minor super-villain.

Carnivora was incarcerated in the super-villain prison known as the Slab. She first appeared in comics as part of the army of super-villains who were "joker-ized" and released by the Joker.

Carnivora was later shot dead by police commissioner Michael Akins while she was partipating in a city-wide gang war in Gotham City.