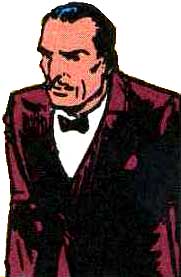 The Religious Affiliation of
Alex Greer

Alex Greer, the final villain to appear in the first Superman comic ever published, was called the "slickest lobbyist in Washington." He may also have been the most evil.

Clark Kent encountered Greer when he went to Washington D.C. while doing a story about a civil war in the small South American republic of San Monte. Kent saw Senator Barrows talking suspiciously to furtive man. Kent surreptitiously photographed the pair and took the photo to a local newspaper morgue to identify the unknown man. It was a knowledgeable newspaper morgue clerk who identified Alex Greer as the "slickest lobbyist in Washington." The clerk added that "no one knows what interests back him."

Clark Kent had heard Barrows and Greer plan to meet that night at 8:30 at the Senator's apartment. As Superman, he eavesdropped on their conversation. Superman learned that Alex Greer was bribing the Senator to push through legislation that would inexorably lead to war between the United States and Europe. The Senator seemed to smile in an evil way when he explained to the grinning lobbyist that he would be able to pass the bill before its nefarious "full implications are realized."

The conversation between Alex Greer and Senator Barrows makes it clear that both of them are engaged in this plot purely for the money. Neither actually has any ideological stake in passing this legislation or in seeing war break out between Europe and the U.S. Shockingly, neither of them seem to care at all about the price in blood and treasure that will likely be paid by both sides in such a war.

After Alex Greer leaves the Senator's home, Superman confronts him, asking him, "Who is behind you in corrupting the Senator?"

Greer feigns ignorance, but Superman doesn't let him off easily. Superman grabs the lobbyist by an ankle and leaps into the air, running dangerously across telephone wires and jumping over onto the Capitol Building. Superman scares Greer considerably when they fall eighty stories to the sidewalk.

Of course Superman is able to do all this safely, but he manages to scare the wits out of Greer, who finally tells what he knows: Greer has been working for Emil Norvell, the munitions magnate. Greer even provides the man's address.

Thus Superman learns that the entire plot behind the Senator's bribery and the legislation he is pushing through was concocted to sell more weapons. Alex Greer was a greedy war profiteer of the worst kind. He was actually helping foment wars, not simply profiting from existing conflicts.

After Superman leaves Greer to find Norvell, Greer is hardly repentant. Rather than taking stock in his life and considering his actions after having such a bizarre life-threatening experience, Greer continues to think only about his own greed. He calls Norvell to warn him that the "most dangerous man alive" is coming for him. (Superman was not yet known to the general public.) Greer warned Norvell not out of any sense of morality or loyalty, but simply because he wanted to protect his cash flow from the weapons maker.

Greer was never seen again. His encounter with Superman bridges the cliff-hanging end of Action Comics #1 an the beginning of Action Comics #2. Although few details are revealed about Greer in the 20 panels on 4 pages that feature him, based on his actions and demeanor he can clearly be classified as manifestly non-religious.