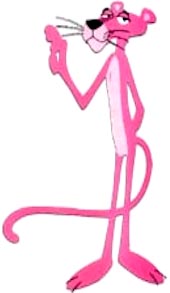 The Religious Affiliation of
The Pink Panther

Enemy of: The Little Man