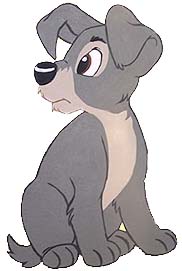 The Religious Affiliation of
Scamp

Scamp is one of the pups who was born to Lady and Tramp at the end of the classic Disney animated feature film Lady and the Tramp (1955).

Rarely has a character with so minor a character in an original appearance gone onto such prominence. Scamp was originally unnamed in Lady and the Tramp. But only a few months after the film was released, Scamp was the star of his own syndicated daily comic strip. Scamp went on to be featured in many regular comic books as well, including a self-titled series. In addition to appearing in hundreds of comics and comic strips, Scamp was the title character in a direct-to-video Disney animated feature film: Lady and the Tramp II: Scamp's Adventure (2001).