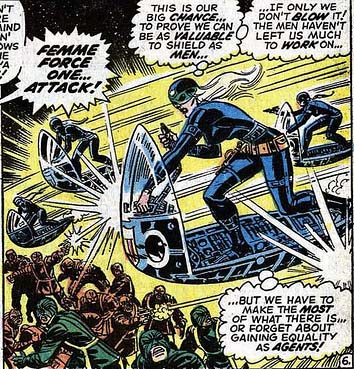 Femme Force was an all-female sub-unit of S.H.I.E.L.D.

Femme Force first appeared in Captain America (vol. 1) #144. At the beginning of the story that introduced Femme Force, we see another new SHIELD sub-unit, called Aero-Attack Force One, being led directly by Nick Fury, flanked by Captain America. (The rest of the squad consisted of numerous unnamed SHIELD agents, all of whom wore flyng jet packs. Aero-Attack Force One is seen raiding a HYDRA base filled with dozens of HYDRA agents. The flying SHIELD agents, led by Nick Fury and Captain America, are able to take down the HYDRA agents, with the help of another SHIELD sub-group: Femme Force. When the battle is over, however, it is revealed that the entire skirmish had been staged as a demonstration for President Richard Nixon and his military advisors, as part of SHIELD's bid to get funding for new technologies and funding to continue Femme Force.

Femme Force was led by longtime Captain America love interest Sharon Carter, flanked by longtime Nick Fury love interest Contessa Valentina. There were numerous other female agents on the squad, none of whom were named. In their first appearance, at least 5 agents in total (including Carter and the Contessa) could be seen, but there may have been more. The agents of Femme Force all rode flying sky sleds.

About Femme Force, Nixon aide Melvin Laird (a real person, by the way) suggested: "And as for the Femme Force -- well, we should certainly consider more funds for that project."

Number of group members listed below: 6 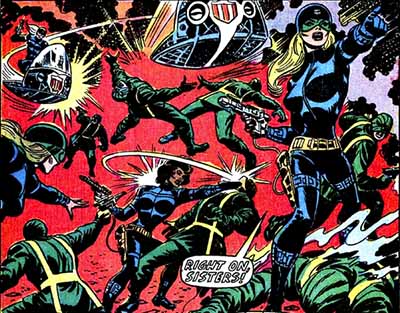 Suggested links for further research about this character:
- http://www.comicvine.com/femme-force/65-56337/
- http://www.marvunapp.com/master/fe.htm