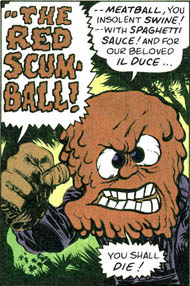 The Religious Affiliation of
Red Meatball with Spaghetti Sauce

Other Names: Red Meatball; The Red Scum-Ball; The Mechanical Beast

As part of a test to see if he was fit to join the Megatropolis Quartest, the remaining three Quartet members dumped Megaton Man on Bug-Eyed Island. While there, Megaton Man encountered an old villain: The Red Meatball.

When Megaton Man first saw him on the island, the Red Meatball was controlling a gigantic mechanical "robot" (really, an exo-suit) which Megaton Man referred to as the "Mechanical Beast."

The voice within the Mechanical Beast boomed: "I live -- AGAIN!"

Megaton Man exclaimed: "That voice! Coming from the Mechanical Beast! It's hauntingly familiar! I'd recognize it anywhere -- even after all these decades!"

Then the Mechanical Beast stepped on Megaton Men, smashing him into the ground.

The Red Meatball emerged from the Mechanical Beast machine and confronted Megaton Man, who was still dazed, on the ground. The Red Meatball said: "How easily you have fallen into my trap, Man of Molecules! Now, after all these decades, the Axis rules -- supreme!"

Megaton Man replied: "You! But of course! Mussolini's right-hand man-- the Red Scum-Ball!"

Red Meatball angrily corrected him, saying "--Meatball, you insolent swine! --with Spaghetti Sauce! And for our beloved Il Duce-- you shall die!"

Apparently Megaton Man (and probably many other people) routinely called this villain the "Red Scumball," but this is not what he called himself.

Rex Rigid (Liquid Man) was in a flying craft, observing. He said to his teammate Yarn Man: "What an inopportune time for Red Meatball with Spaghetti Sauce to turn up alive! We're not ready -- as a team! We needed more time!" 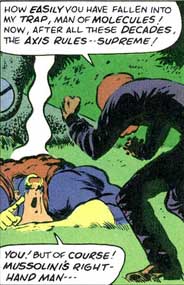 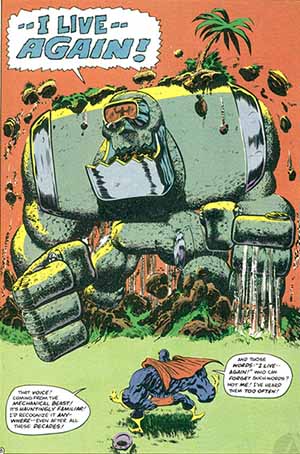 Suggested links for further research about this character and the character's religious affiliation:
- https://www.comics.org/issue/39683/