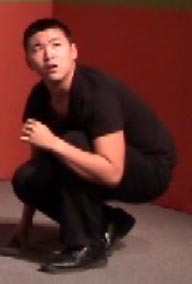 Unsuccessful playwrights Milo and Robert were desperately trying to come up with an idea for a play. Their next door neighbor, who sometimes spoke to them through the relatively thin wall between their apartments suggested an idea about two lovers caught up in the turmoil of war.

In serious tones, Jerry continued outlining his idea, telling Milo and Robert: "...that's where things get really interesting. So there is all this destruction on around the lovers... The bombing run stops, there's nothing but silence."

Milo and Robert were on the edge of their seats listening to Jerry's gripping idea. As Jerry talked, the two generic "Actors" in "Writer's Block" appeared on stage and silently pantomimed the characters and actions in this play.

Jerry continued: "The man looks to the woman, then gets up. He looks out the window at the decimated town. But then, he sees more planes. Definitely enemies. The planes start dropping their cargo. The man drops down, expecting an explosion. He hears nothing. He looks outside and he sees raining hellfire that could only be caused by one thing."

Jerry paused. Anxious to hear what Jerry's tale was leading up to, Milo blurted out: "What?!"

Upon hearing this, the two actors portraying Jerry's "play" premise looked at each other and walked off stage in disappointment.

Robert and Milo were disappointed, but not too surprised, given what the knew about Jerry.

Robert said: "I told you he would."

Quite possibly Jerry's idea for a play was really just a set-up for a joke about bagels. Jerry loved to tell jokes about bagels.

An alternative interpretation of this scene (suggested by a lead cast member from the play who spoke with this indexer) is that Jerry was completely serious when he offered a bagel as the dramatic conclusion to his story. This cast member said that Jerry's character is somewhat crazy, and that he is so completely obsessed with bagels that he genuinely believed a bagel would be the most powerful, most dangerous, most appropriate climax to the story he concocted. 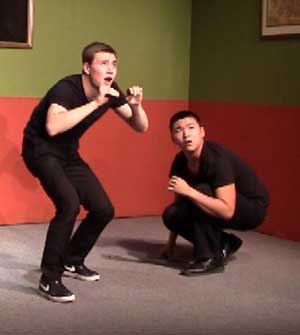