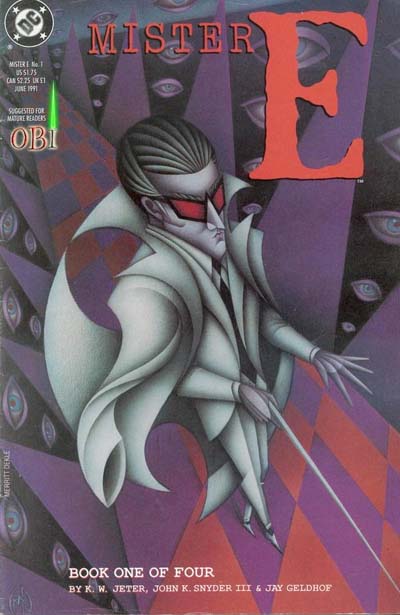 Mister E was born as Erik (his last name has not been revealed). Erik was raised by a mentally unstable father whose strong Protestant Christian religious beliefs became twisted into extreme psychotic behavior. While he was still a child, Erik's father blinded him in a delusional attempt to save his son from temptation. Erik's father believed humanity was inherently evil. By blinding his son, Erik's mentally deranged father's thought he was protecting his son from temptation. This traumatic experience shattered young Erik's psyche and led him become psychotic and fanatical. Erik deeply loved his father and his young mind blocked out many of the details surrounding this event.

Despite (or perhaps partially because of) his blindness, Erik was able to develop supernatural senses. He developed the mystical ability to see good and evil in the souls of others. He also developed the ability to psychically travel through time. Mister E forged himself into a night-time vigilante, vanquishing those he saw as evil. He had a talent for dealing with supernatural enemies, and eventually he became an ally of other supernatural heroes: Doctor Occult, John Constantine and the Phantom Stranger.

As an adult, Mister E is a complex character with a personality made all the more complex by the fact that he suffers from multiple personality disorder. His personality varies from mild to that of an arguably psychotic fundamentalist Protestant Christian - a personality rooted in his upbringing. The stories featuring Mister E are often morally complex or morally ambiguous. He is often the protagonist, but it is not always clear whether he is a "hero" in the purest, most traditional sense of the word.

The degree to which Mister E's strong religious upbringing is evident in his daily adult life varies. But these beliefs remain a major source of his beliefs and motivations, whatever personality he exhibits. Furthermore, his religious upbringing and childhood trauma remain the events that most significantly shaped who he is today. 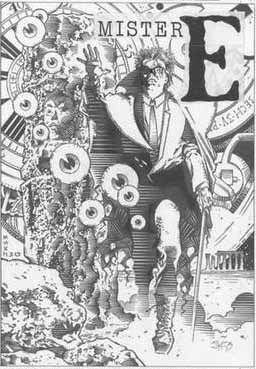 From email we received from Scott Andrew Hutchins on 2 December 2008:

Mister E is a big-time fundamentalist in DC/Vertigo Comics.