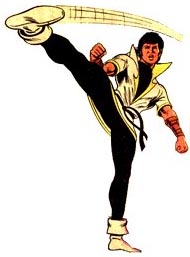 Teams/Affiliations: The Legion of Super-Heroes; Workforce

The identity of this new villain "Trident" was originally a mystery. It was not until later that it was revealed that he was actually Karate Kid in disguise. Most readers as well as the heroes and villains who encountered Trident probably just assumed he was a brand new character who was modelling himself after the previous trio of villains who used the name. It was not until the end of Justice League of America (vol. 2) #7 (May 2007), when Batman scanned the captive Trident's fingerprints and obtained a match from his Batcave's connection to the Fortress of Solitude computers, that the true and inexplicable identity of Trident was revealed: Karate Kid from the 31st Century.

After discovering Trident's true identity, Batman brought him to Justice League headquarters. Karate Kid had apparently been tampered with mentally. He still thought he was "Wes Holloway," a "member of the Trident Guild." Wes Holloway was not known to be a name of any of the trio of villains who were the original Trident.