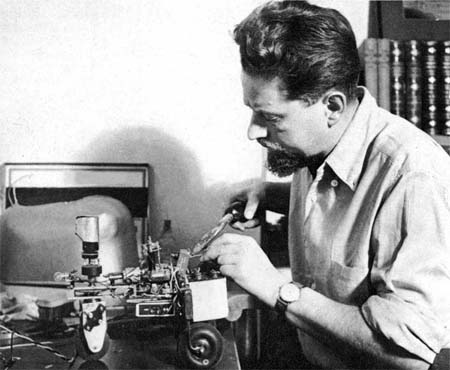 Dr. W. Grey Walter was a real person, a noted neurophysiologist and robotician. With regards to his religious/ideological affiliation, his eldest son, Nicolas Walter, noted (http://en.wikipedia.org/wiki/William_Grey_Walter) that his father "was politically on the left, a communist fellow-traveller before the Second World War and an anarchist sympathiser after it." (Nicolas Walter is himself an anarchist and atheist writer and activist, so clearly his own beliefs color his recollection and description of his father. But there is no reason to doubt the accuracy of this short description of Dr. Walter's beliefs. No doubt Dr. Grey's own Communist and Anarchist beliefs were the major source of his son's similar belief system.

Bruce Wayne was showing donors to the Alfred Foundation Laboratories some of the lab's recent developments. One was the "encephitector," which Wayne described as "a burglar-alarm system that alerts you a robbery is about to occur!"

Bruce Wayne described the invention further, explaining (in panel 1 on page 7): "Just as a dog can 'smell' fear in a person -- this encephitector picks out and filters the alpha waves that a human brain gives out!* It is geared to react when those main waves show a person is thinking about comitting a crime!"

The asterisk in Bruce Wayne's statement leads to an editor's note at the bottom of the panel. The note reads: "Editor's Note: Dr. W. Grey Walter of the Burden Neurological Institute in Bristol, England, already has developed a machine that sorts out these electrical impulses of the brain!"