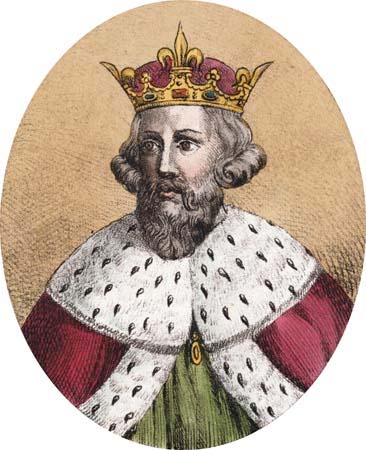 The Religious Affiliation of
King Alfred the Great

King Alfred the Great was mentioned (but did not appear) in the Batman story in Detective Comics #329 (July 1964). Batman and Robin are staying in an old castle in England, where they came in pursuit of a criminal who escaped arrest in Gotham City. In panel 2 on page 5, Robin mentions what the castle's current owner (Albert Maunch) told him: "He said that according to local legend King Alfred the Great once lived here! and this was his royal chamber.

Alfred is venerated as a saint by the Catholic Church and the Eastern Orthodox Church and is regarded as a hero of the Christian Church in the Anglican Communion, with a feast day of 26 October, and may often be found depicted in stained glass in Church of England parish churches. Also, Alfred University was named after him; a large statue of his likeness is in the center of campus.