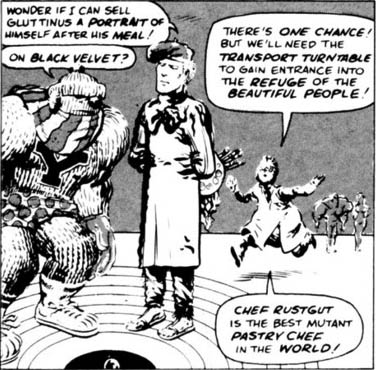 The Religious Affiliation of
Chef Rustgut

Location: Refuge of the Beautiful People

Chef Rustgut is an amazingly talented pastry chef who is a member of the offshoot race of humanity known as the "Beautiful People" (or, alternatively, as the "In Humans"). This race is a parody of the Inhumans, who are a significant group of Marvel characters first introduced as supporting characters in the Fantastic Four comic book series.

On page 0 in Megaton Man #4 (June 1985), the gigantic cosmic being Gluttinus (a parody of Galactus) came to Earth to satisfy his hunger. He was intending to devour much of the planet. Rex Rigid (a parody of Reed Richards) thought of plan to prevent the Earth's destruction by enlisting the aid of Chef Rustgut. Presumably Chef Rustgut would be able to create some type of confection which would satisfy the hunger of Gluttinus.

Rex Rigid (Liquid Man): "There's one chance! But we'll need the Transport Turntable to gain entrance into the Refuge of the Beautiful People! Chief Rustgut is the best mutant pastry chef in the world!"

Rex Rigid: You know! The 'IN' Humans"