When Kevin Sydney first appeared as a distinct character, it was as the mysterious "master" or deputy leader of Factor Three. He was not yet identified by name. This was in the issue #35 of the original X-Men series. It was until later that the name of the "master" was revealed. He was the mutant named "Changeling."

The Changeling was seen again in the next issue, X-Men (vol. 1) #36. Once again he appeared briefly as a mysterious figure. He wore a strange helmet and his name had yet to be revealed.

The mysterious figure was finally identified by name as "The Changeling" in the next issue, X-Men (vol. 1) #37.

The Changeling was later recruited to impersonate Professor Charles Xavier. He used his metamorphic power to appear as Professor X. Furthermore, the real Charles Xavier temporarily imbued him with limited telepathic powers. 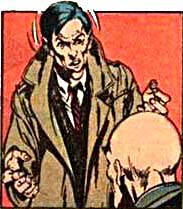 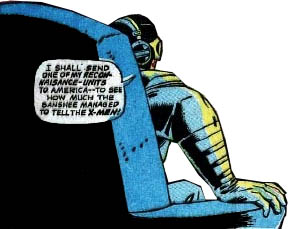 This character is in the following 46 stories which have been indexed by this website:

Excalibur: The Possession (July 1991): "The Changeling"