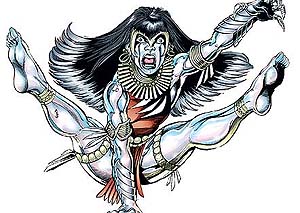 Note: Silverclaw was pictured in the back row (about the 6th person from the left) on a wraparound cover spread picture featuring Marvel characters taking part in the Initiative. This was the cover for Avengers: The Initiative #1. Note that on the "map" to the picture provided on Marve's official website - the map which listed all of the characters depicted - Silverclaw is incorrectly identified as "Silvercrow."

Atheist representation on the Avengers

The teams pretty well rounded now, but are there any atheistic members?...

...Probably the best comic you could find to figure out who believes in a God or a god, or has deep faith in God or a god would be:

Infinity Crusade
The Goddess uses the heroes' faith and belief in gods and such to recruit heroes.

All other Avengers are up in the air.