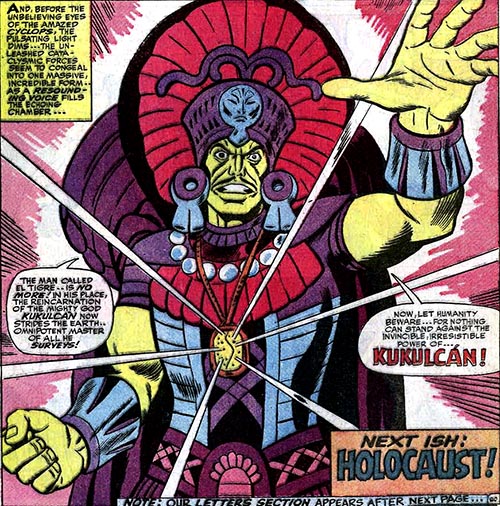 Other Names: Kukulcan; Kukulcán; The Tiger; Mightiest of the Ancient Mayan Gods

Note: became an avatar of Quetzalcoatl

The source of El Tigre's powers was a mystical pendant. The pendant gave him the power to project solar energy as well as control the minds of descendants of Mayans. After finding the pendant and gaining powers, El Tigre came to believe that he himself was the reincarnation of the Mayan god Kukulkan.

In X-Men (vol. 1) #25, when El Tigre and his two servants (Ramon and Toloc) found the ancient Mayan pyramid that El Tigre had been searching for, he jubilantly announced that this find would make him the richest man in San Rico. This strongly suggests that El Tigre was not simply gem-hunting in San Rico, but that he regularly lived there as well. As far as we know, El Tigre is a native of this small Latin American nation.