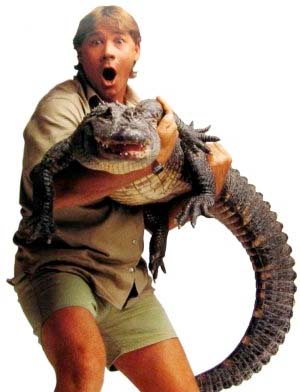 The Religious Affiliation of
The Crocodile Hunter
Steve Irwin

TV, Film Appearances As Himself: 145

Steve Irwin was tragically killed by a stingray while filming a segment for his TV series.

There is an oblique reference to Steve Irwin, the "Crocodile Hunter" in Joker: Last Laugh #5 (Dec. 2001). In this story, Robin (Tim Drake) has been captured by escaped super-villains. Killer Croc has taken Robin away, proclaiming his intention to eat the young hero. The superheroine Huntress is hot on their trail, talking to Oracle via telecommunications link. Huntress, tracks them to Gotham Cathedral and then below the edifice, where she sees flowing water, part of the sewage or drainage system for the city. She notes the water way to Oracle, who offers a tip about crocodiles.

Oracle tells Huntress, "If there's water, then Croc is close. He's not a crocodile, but he imitates one. He drowns his prey. Saves them for later."

In this brief quip, the Huntress has replaced the word "Hunter" with her own name ("Huntress") in the title of Steve Irwin's syndicated TV show "Crocodile Hunter." It was while watching "Crocodile Hunter" that Huntress learned about how crocodiles drag their prey under water to drown them and them save the prey to eat later. Huntress assumes that Oracle watched the same show and learned this tidbit from that program as well.