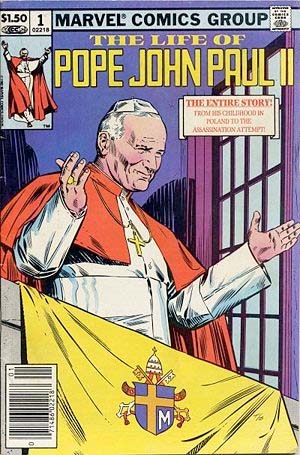 TV, Film Appearances As Himself: 96

Enemy of: The Crimson Mage

Defended or Helped by: Ghost Rider

The Pope of the Catholic Church was a major supporting character in What If? #28 (Aug. 1981). The villainous demon-powered sorcerer Azaziah Hornsby (also known as the Crimson Mage) manages in this story to sever the Ghost Rider spirit from its regular host, noble Johnny Blaze, and bond the power of Ghost Rider to himself. As "Ghost Rider," Azaziah journeys to Vatican City, defeats the Swiss Guard, and captures the Pope. Azaziah plans to perform a ritual in which he sacrifices the Pope, using the "Scimitar of Ra-Mon-Beth." The evil sorcerer was born in the Middle Ages and, as Blaze surmises, he considers the Pope to be the center of power and world civilization. Whether or not sacrificing the Pope would actually allow Azaziah to vanquish world Christianity and take over the world is never revealed, because Johnny Blaze arrives just in time to vanquish Azaziah. In doing this, Johnny Blaze sacrifices his own freedom from the Ghost Rider in order to save th Pope.

Having not yet read this story for ourselves, we can not be certain, but from we can ascertain, the Pope in this story was not explicitly named. However, there is only on Catholic Pope in Vatican City at a time, and when this story was published, Pope John Paul II was the Pope.

Pope John Paul II became the Pope on 16 October 1978, about three years before the publication of this What If? story. We are unaware of any depiction of the Pope in a Marvel comic prior to this, but it is possible that such an appearance can be found. Any prior depiction would probably not be as prominent as this, however.

Over a year after this What If? story was published, Pope John Paul II was the star of his own Marvel Comics one-shot. The Life of Pope John Paul II #1 had a cover date of January 1983. Unlike the What If? story, this special one-shot was not set in the Marvel Universe. (On the other hand, given the fact that the Marvel Earth is based on our own, there is actually nothing in this comic book biography of the Pope that conflicts with actual Marvel continuity.)

As he was one of the most famous an influential figures of the late 20th Century, here are, no doubt, more depictions of Pope John Paul II in Marvel comics and general comicdom than the two mentioned above.