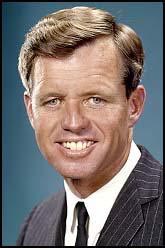 The Religious Affiliation of
Robert Kennedy

TV, Film Appearances As Himself: 169