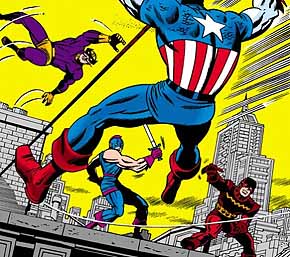 The Religious Affiliation of
Batroc’s Brigade

This all sets up a clear pattern: Batroc works alongside two costumed super-villains (or super-mercenaries), all of whom have distinct codenames, costumes, modus operandi, etc.

When this version of Batroc's Brigade first appeared, they were a group of seven thugs, all quite large and muscular, all male, who were helping Batroc in his mission to deliver children kidnapped from around New York City to a mysterious client. Batroc did not realize that the children were to be turned over to an alien named Jakar, who intended to use them as a source of energy to cure his wife and other members of his race from a mysterious plague.

The fact that the mercenary henchmen who comprised this version of Batroc's Brigade were willing to participate in a kidnapping plot just to earn some money illustrates their coldly mercenary nature. These mens seemed to be deeply selfish and immoral, without any ideological motivations for their actions. There is nothing to indicate that they should be classified with regards to religious affiliation as anything but manifestly non-religious.

Batroc himself, once he knew the children would be turned over to the alien Jakar, was quite remorseful about his participation in the kidnapping plot, and he essentially switched sides and helped Captain America and the Falcon take down Jakar and rescue the children. But the men of Batroc's Brigade displayed no such remorse and continued to attack Captain America and the Falcon even after Jakar had revealed himself.