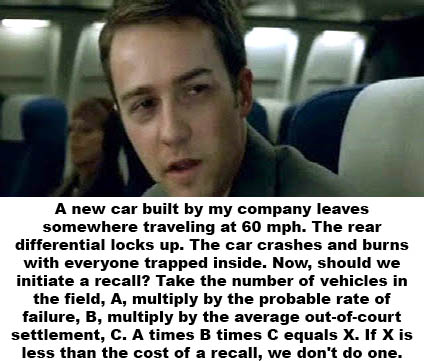 The unnamed narrator of the novel Flight Club (played by actor Edward Norton in the feature film adaptation) works as an insurance adjuster (or "insurance investigator") for a major American car company. Some sources refer to the Narrator's job as "product recall specialist."

Excerpt from the film:

Narrator: A new car built by my company leaves somewhere traveling at 60 mph. The rear differential locks up. The car crashes and burns with everyone trapped inside. Now, should we initiate a recall? Take the number of vehicles in the field, A, multiply by the probable rate of failure, B, multiply by the average out-of-court settlement, C. A times B times C equals X. If X is less than the cost of a recall, we don't do one.

Woman on plane: Are there a lot of these kinds of accidents?

Woman on plane: Which car company do you work for?

Narrator: A major one.

Presumably the author of the novel intended the car company to be an actual American car company, but the company is not named. There are probably two reasons for this. One: the exact identity of the company is immaterial to the story. Note that not even the name of the central protagonist (narrator) is ever identified in the novel or the movie based on it. The character is intended to be something of an anonymous "everyman," and identifying the name of the company he works for would take away from that. The point is, he could work for any company. He works for the same company that you (the reader) works for. Secondly, the writer probably wanted to avoid legal action or other problems that would arise if he named a real car company and injected unflattering fictional claims about the company alongside a sociopathic employee.