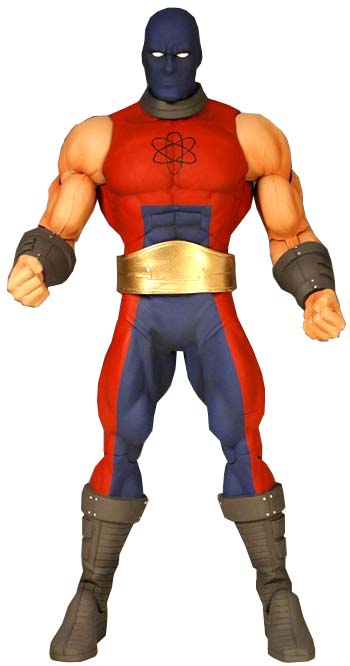 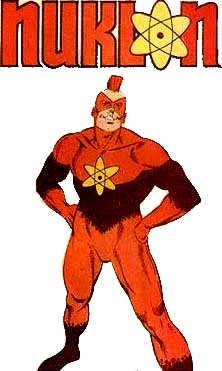 re: "Just out of curiosity, is there any major character in the DC Universe definitely shown as being Jewish? Several months ago, several people listed Jewish characters in other universes, but I don't recall any in the DCU."

Pre-Crisis, Colossal Boy (now Leviathan) of the Legion of Super-Heroes was portrayed as Jewish. Nuklon of the Infinity Inc. and the JLA is Jewish. Ragman is Jewish.

To keep this on topic (sorta), why are most heroes not as religious as they could be? ...the only really religious person that's sane that I recall in DCU is Huntress, and I guess Wonder Woman... Anyone else...?

...Albert Rothstein (Atom Smasher, I think it is now?) is Jewish...

I don't know that religion is really ignored in comic books. I'd say it turns up at least as much as it would in a regular series of novels or a TV series. More so, even.

Other characters whose religions I'm familiar with:
Fire is Catholic
Nuklon is Jewish...
[More are listed]

Very little religion in the DCU - there seems to be a pervading non-denominational deist philosophy (Spectre is an agent of God, but let's not be specific about what religion for fear of alienating the others).

Pre-Crisis Superman presumably nominally a member of the Kryptonian religion (whatever that was) by virtue of his frequent "Great Rao!"s.

A bit tricky to address religion in a universe where there is quite a high preponderance of actual Gods!

I am a Christian... There is a reason there is no Christian superhero. Same reason as there is no real Jewish [superhero]... that flaunt their religion or fight for religious belief specific notions. It's because they would be offensive to many, if not most, of the readership.

Besides -- Zauriel, Bloodwynd, Wonder Woman, the Spectre, the Quintet, etc., etc., are all based on or are slaves to religious beliefs, but none actively flaunt it, or debate which is correct, so a hard-line Christian super hero would probably not sit too well.

As far as I know, none of them are fundamentalists, against other religions or...

I thought one of the most interesting aspects of Infinity Inc. was the way Roy Thomas portrayed the characters' various religions and how they influenced the characters lives.

Seeing the characters praying, lighting candles for loved ones, having Bar Mitzvahs, made them more human to me than characters in most other funny books ;).

Sure religion is controversial and people believe different things on both sides of the 4th wall but I find it interesting to see it having such a keen role in the lives of young people who might otherwise seem silly because they choose to run around in tights instead of trying to lead "normal" lives.

And even though I may never know what Roy Thomas' religion is, it showed me what an important role his beliefs had in his own life :).

...Moon Knight, Sandman, and Nuklon are all Jewish by heritage though (IIRC [if I recall correctly]) non-practicing...

Ed (there are plenty of characters, but he sticks out as the most recent in my mind, at least in 20th C. Earth)

That's the only one I can remember.

The Golden Age Sandman was just revealed to be half-Jewish. And I recall that Nuklon was strongly Jewish in the final issues of one of the recently axed JL [Justice League] titles.

Incidentally: If anyone out there is interested in starting a Web site devoted to Jewish spins on comic books, please e-mail. I have Web space I can make available for that purpose.

...5a. Atom Smasher represents redemption. He made a mistake and sacrificed his life to correct it, and then was brought back from the brink of death and is now serving his punishment...

In relation to question 6: as a Jewish comic book reader, I look around a great deal for any sign of Jewish stuff in comics. It's a habit. Things like the upcoming Sgt. Rock mini about rescuing the rabbi in Eastern Europe are few and far between. Interestingly, the three highest profile Jewish characters at Marvel--Kitty Pryde, the Thing and Moon Knight--have a mini-series, an ongoing and an upcoming ongoing, respectively. On the DC side, Ragman is in the Shadowpact ongoing, but otherwise, Atom Smasher is in jail and... that's it. No one's heard from Seraph and Hayoth for years, and I think I'm the only person that considers Black Canary to actually be Jewish (I have my reasons). Atom Smasher could become a player in OYL considering his current imprisoned status and his apparent recruitment by Amanda Waller.

As for Jewish themes in writing, the legend of the Golem has influenced a number of characters, most notably Marvel's Thing.

...Other Jewish heroes include Atom-Smasher (dunno if this makes the golden age Atom, his godfather, Jewish too) but I'm not overly familiar with the minutiae of DC lore...

So far my League of [Jewish Superheroes] is as follows:

[Five other Jewish superheroes listed, with comments for each]

From: "What Religion is Your Favorite Superhero?" forum discussion, started 20 April 2006 on the official DC Comics website (http://dcboards.warnerbros.com/web/thread.jspa?threadID=2000072337&tstart=0; viewed 8 May 2006):

...What is the religion of the heroes we read about?... Don't get me wrong, not picking on anyone, just wonder what everyone thinks what our heroes believe... (maybe a moderater can have some imput..?) ....other threads touch on the subject in passing, time to discuss it!

For the vast majority, it is deliberately left unsaid and any distinct belief system is never referred to. Unless otherwise indicated, I pretty much assume most believe in God, but don't attend service very often. Here are the ones I know about:
Huntress - Catholic
Blue Devil - Catholic
Atom Smasher - Jewish
Ragman - Jewish
Mr. Terrific - Atheist
Wonder Woman - Greek Gods

...when was it established that Ray Palmer is Jewish? I know Atom Smasher (Albert Rothstein) is Jewish, but the Atom?

Ray Palmer isn't Jewish. This was clearly established in the original JLA series where his Jewish friend invites him to a Hannukah celebration.

Atom Smasher on the other hand is Jewish.

Atom Smasher is Jewish (So am I. That's why I kinda keep track.)

I feel like DC is tying to be an advocate... Is DC just wanting quick media attention? If this were truly about diversity where is the devote Christian hero? What about a Pro-Life Republican? A priest that takes a vow of poverty to fight poverty?

For years people have praised or criticize liberal Hollywood. Are we now looking at a Liberal DC comics?

They're out there. But, once again, as with your examples, they tend to be supporting characters. The Spectre is probably the best example of an overtly relgious hero that DC has ever had. Jim Corrigan's talks with Father Cramer and his worldview are clearly deeply (and sometimes disturbingly) religious.

But there are many other examples. Atom-Smasher comes to mind.

Here are a couple I'm not sure about...
Monolith (Judaism?)
Etrigan (Catholicism?)

I know Atom Smasher is Jewish and Doc. Mid-Nite is Christian, but I'm not sure about anybody else and don't want to label anyone wrongly. Anyway, religion seems pretty well represented, IMO...

Sure, they [Siegel and Shuster] were Jewish, but that doesn't make the character [Superman] Jewish.

Oh hold on, I'll find that website someone pointed me to the other day...at this point, with everyone treating me like comics are the only thing I'm interested in, I don't even know if the link was given to me by someone off the board or on.

I got there from here:
http://www.beliefnet.com/features/comicbookfaith.html

which points out a few Jewish heroes that, y'know, SAY they're Jewish.

Atom Smasher is Jewish, too, right? And who is it in the Crisis that says they're Jewish? (TheMoosh is going to check it out...la la la... Ragman.)

Thanks to Jack G. for this. And I so admire The Acidic Jew [link to: http://www.adherents.com/lit/comics/AcidicJew.html].

I love that site. It's informative, and also in some cases funny. I love Ragman, though. Of all the Jewish heroes, he's probably my favorite, probably because of how horrible his name is, yet how awesome his power is (he's like a non-killing Spectre). It's somewhat sad that Ragman is competing with Atom-Smasher for biggest Jew in DCU, since Ragman's the only one in a title right now (Shadowpact)...

America vs. the Justice Society