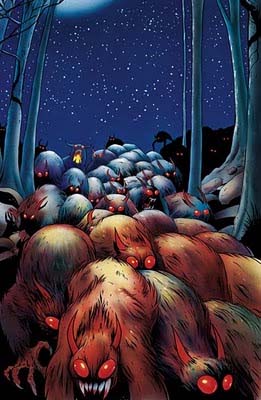 The Religious Affiliation of
Rat Creatures

Other Names: The Rats; The Hairy Men

Worked for: Kingdok, The Hooded One

"Rat Creatures" are a race of strange beings who resemble rats in some ways, but clearly are not regular rats. Even beyond their immense size (they are larger than humans), they have features that are not rat-like, such as their horns. Thus, we have not classified them as simply "uplifted animals." They are sentient beings, apparently as intelligent as humans. They converse normally with the other inhabitants of the valley, including humans.