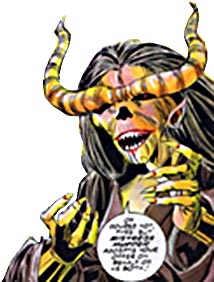 The Religious Affiliation of
Mistress Murder

Summary of Blood Syndicate #22 (Jan. 1995), from now-defunct webpage at http://milestone.luthor.com/comics_detail.asp?ID=80&:

Masquerade is captured by Agent Rose. Wise Son and Fade have a heart-to-heart discussion about where the Syndicate is going. Agent Rose is concerned about a test subject at the Garden Station (survivor from the Cross Station). We see the stripper Karess of Dogtown get kidnapped as well Babe. Hannibal tortures Kwai's shooter.

Summary of Blood Syndicate #23 (Feb. 1995), from now-defunct webpage at http://milestone.luthor.com/comics_detail.asp?ID=81&:

Kwai's healing light changes the Syndicate back to normal for a short time. Kwai is healed and we meet the cat Pearl. We learn that Agent Rose has cancer and that his daughter(?) is the Cross Station survivor. Pearl tells Kwai that it is her last life. BoogieMan is confronted about being white.

Summary of Blood Syndicate #24 (Mar. 1995), from now-defunct webpage at http://milestone.luthor.com/comics_detail.asp?ID=82&:

Third Rail and Brickhouse decide to leave the Syndicate because of Wise Son. Garden Station, command center for the Amber sector of S.Y.S.T.E.M., is attempting to create custom-made bang babies. We learn more of their plan and how they mean to control the babies. Agent Rose double-crosses Mom and destroys the Garden Station and the test subjects. We see Karess, Babe, Masquerade, Oro, Templo and the Cross Station survivor survive the Garden Station war.

Summary of Blood Syndicate #26 (May 1995), from now-defunct webpage at http://milestone.luthor.com/comics_detail.asp?ID=84&:

Tech-9 tries to convince the Syndicate that he is really Tech-9. We see Brickhouse and Third Rail in their new place. Templo, Mistress Mercy and Rose go to the church of Father Francisco. We meet Grandmother and the servants of Mom are killed. We see Dogg beaten up and left for dead on the other side of Paris Island. 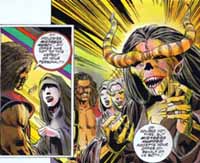 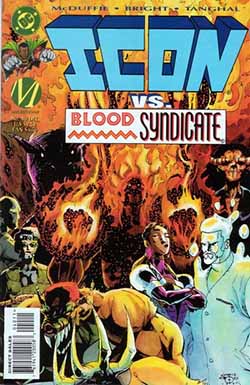