8 characters in this story:

Timecode: 18 minutes, 34 seconds: Lois Lane and Clark Kent have been unable to locate former LexCorp robotics scientist Emmett Vale, but they have located his ex-wife. They come to a hot dog stand in downtown Metropolis to talk to her.

Mrs. Vale: What'll it be, handsome?

Mrs. Vale: Who wants to know?

Clark Kent: Uh, how are your hot dogs?

Clark Kent: May I have on, please? Mustard, no onions.

Lois Lane: We think that your ex-husband might have something to do with that robot that robbed the jewelry store.

Mrs. Vale: Good. Maybe I'll start getting my alimony. I can quit this stinking job.

Clark Kent: So, you think he might have something to do with it?

BELOW: The ex-wife of Emmett Vale (creator of Metallo) recalls how he was obsessed with robots: 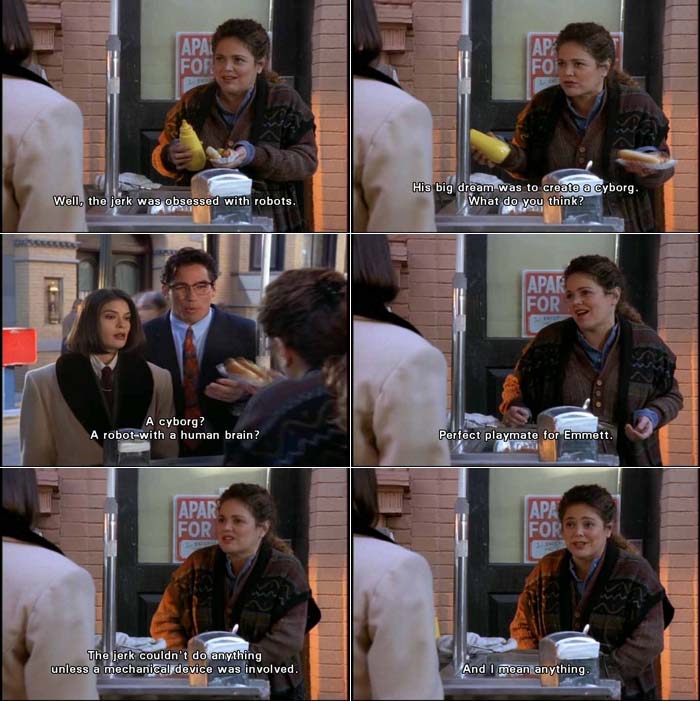 Mrs. Vale: Well, the jerk was obsessed with robots. His big dream ws to create a cyborg. What do you think?

Clark Kent: A cyborg? A robot with a human brain?

Mrs. Vale: Perfect playmate for Emmett. Dumping him was the best thing I ever did. The jerk couldn't do anything unless a mechanical device was involved. And I mean anything.

Lois Lane: Clark, have you talked to Superman?

Lois Lane: I don't know why he doesn't contact me.

Lois Lane: Embarrassed? Does he think that because he couldn't defeat some robot, that that changes the way I feel? Clark, that's not what attracs me. It's his intelligence and caring. He's-- He has integrity and innate goodness. I mean, he's a lot like you.