6 characters in this story:

Timecode: 4 minutes, 17 seconds: Clark Kent's parents are visiting from Smallville. Clark is showing them around the new offices of the Daily Planet.

Clark Kent: So, what do you think of the new offices?

[Clark Kent's father, Jonathan, was not really listening. He seems adrift in his thoughts. In the opening scene of this episode he seemed depressed and unusually quiet as well. Clark and his mother look at Jonthan, clearly uncomfortable with how distracted and depressed Jonthan seems. Jonathan tries to put them at ease.]

Clark Kent: You know, Dad, we have a reporter here who covers trends in agriculture. Would you like to meet him?

BELOW: Lois says Roy is at Idaho Spud Festival:

Jonathan Kent: It's okay, Clark, you don't have to entertain me all the time.

Lois Lane: You wanna meet someone that knows a lot about manure, Daniel Hansen's here.

Martha Kent: Who's that?

Perry White: [emerging from his office, accompanied by Daniel Hansen.] Lois, Clark. Glad you're still here. Mr. Hansen was just saying how much he wanted to meet you.

Lois Lane: Well, thank you. I'm sure if you get elected we'll have a lot to write about.

[Daniel Hansen gives a brief, uncomfortable chuckle, but the candidate's smile never leaves his face. He turns to Clark's parents and shakes their hands, just as he shook the hands of Lois and Clark a moment before.]

BELOW: Martha Kent affirms to a political candidate that Smallville and Metropolis: 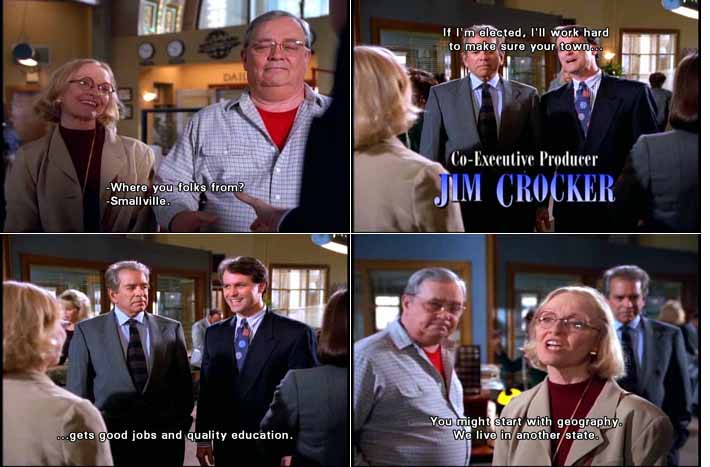 [Daniel Hansen sees the potential voter and make a beeline over to him, leaving the Kents, Perry and Lois to muse over their encounter with this obviously shallow politician.]

Martha Kent: [calling after the politician] You might start with geography. We live in another state.

Jonathan Kent: [to Martha] Let's go, Martha. I'm sure Clark has plenty of things to do.

Perry White: Oh, no. Now, look, no VIP tour of the Daily Planet's complete without a visit to the managing editor's office. Come on, you two. You know, I haven't always been a desk jockey.

[Perry White takes Jonathan and Martha Kent into his office. Lois Lane and Clark watch them go. When they are out of earshot, Lois asks Clark about the demeanor of his father.]

BELOW: Clark Kent's father is very depressed after the death of his best friend Henry: 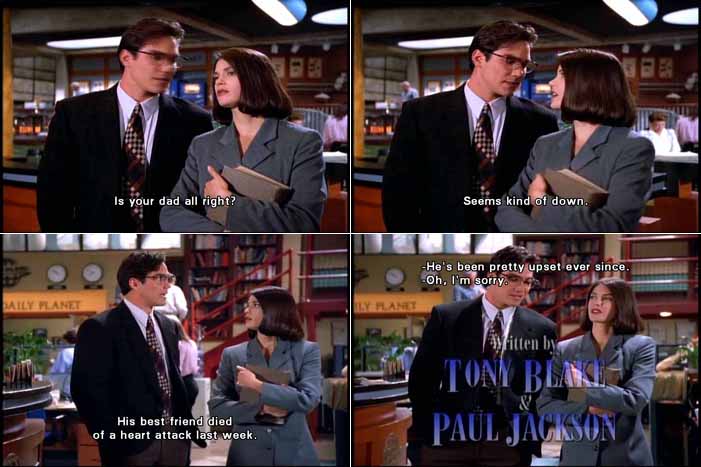 Lois Lane: Is your dad all right? Seems kind of down.

Clark Kent: His best friend died of a heart attack last week. He's been pretty upset ever since.

Clark Kent: I'm doing all I can to keep him busy, but I'm running out of ideas.

Lois Lane: I have a friend at the transit authority. Maybe I can get him a couple tickets on the inaugural ride on the new subway.

Clark Kent: Ah. Anything would help.

Timecode: 7 minutes, 8 seconds: Stuart Hofferman, an engineer at Viologic Electronics, a large electronics component company has come to divulge some inside information about his company to reporter Lois Lane. He knows that a Ferris wheel accident yesterday was caused by faulty computer switches that his company manufactured - components that the company knew were faulty before the sold them. Hofferman asks Lois Lane for a tissue from her desk so he can clean his glasses. After he cleans his glasses, Lois notices that he seems extremely nervous. He keeps fiddling with the tissue. Lois finally picks up a waste basket next to her desk and offers it to Hofferman, motioning for him to throw the tissue away. His response is unusual.

BELOW: Stuart Hofferman is such an extreme Environmentalist that he saves his tissues: 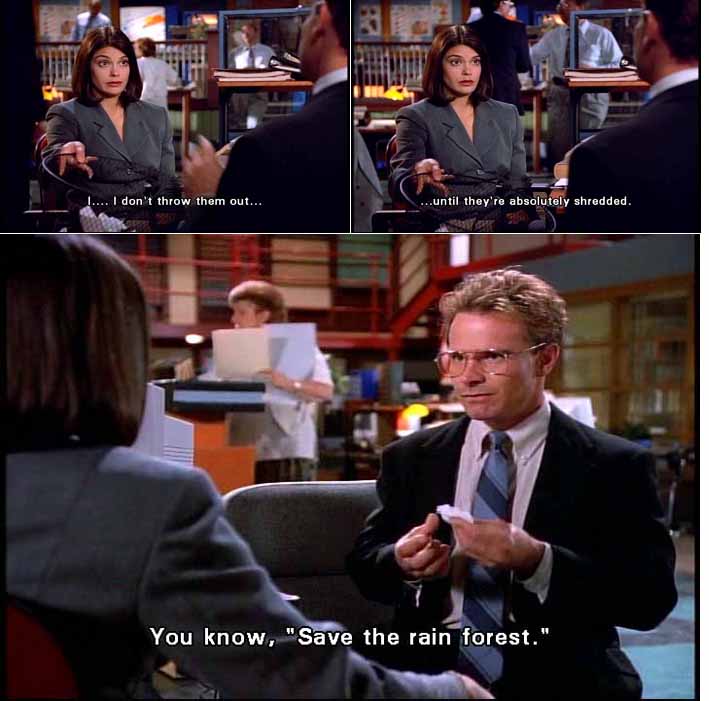 Stuart Hofferman: I . . . I don't, uh, throw them out until they're absolutely shredded. You know, "Save the rain forest."

What are we to make of Stuart Hofferman's claim that he doesn't throw out tissues until "they're absolutely shredded?" Lois Lane keeps a "Recycling" poster on the wall next to her desk. She certainly is pro-recycling and has environmental sensitivities. But she never would have considered saving a tissue like this, and she clearly thinks Hofferman's action here is peculiar. Is Hofferman really such an extreme environmentalist that he saves tissues in order to cut down his "environmental footprint," or is there some other explanation for his strange behavior?

Timecode: 8 minutes, 44 seconds: Martha and Jonathan Kent are at Clark Kent's Metropolis apartment, continuing their vacation. Clark is playing checkers with his obviously morose father at the kitchen table. Clark makes a particularly good move, capturing many of his father's pieces on the checkers board.

BELOW: Clark Kent's father continues to exhibit depression about the death of his best friend: 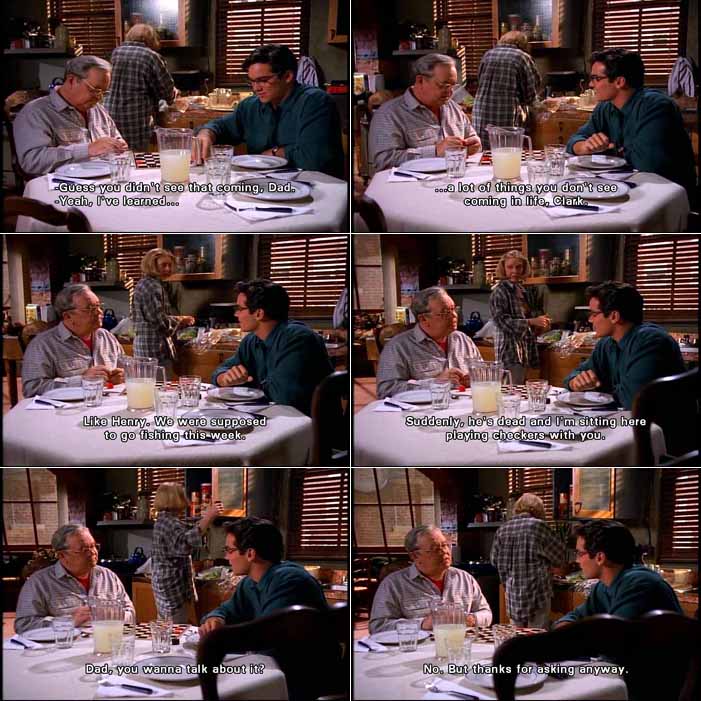 Jonathan Kent: Yeah, I've learned . . . a lot of things you don't see coming in life, Clark. Like Henry. We were supposed to go fishing this week. Suddenly he's dead and I'm sitting here playing checkers with you.

Clark Kent: Dad, you wanna talk about it?

Jonathan Kent: No. But thanks for asking anyway.

Timecode: 16 minutes, 3 seconds: After a Viologic press conference, the significance of the earlier scene in, which Stuart Hofferman refused to discard his tissue, becomes clear. Stuart Hofferman's bosses at Viologic know that he was the source of the leak of information to the Daily Planet. They force him to attend a press conference and declare that Lois Lane's inside information about Viologic is false. During this statement, Stuart Hofferman cleans his glasses with a tissue. After Hofferman issues this statement, he makes eye contact with Lois Lane. Lois sees him pointedly drop his tissue in a trash can. Lois realizes that it must be a note.

Of course, at the time that Stuart Hofferman first met Lois, he did not know that he would need to pass a message to Lois Lane in this manner. So it seems that from an in-textual perspective, he really is so obsessive about Environmentalism that he actually save his tissues until their shredded. The writers of this episode gave this character quirk to him as a convenient, interesting, visual way for him to later pass a secret message to Lois, despite being under the watchful eye of his Viologic bosses.

[Indeed, Lois goes to the trash can and fishes the tissue out of it. On it Stuart Hofferman wrote the following "message: "MEET AT THE PIER: 1 HOUR."]

Timecode: 29 minutes, 32 seconds: After Lois Lane's source on the Viologic story is apparently murdered, the lawyers and owners of of the Daily Planet have a two hour meeting with Perry White. The end result of the meeting is that Perry is ordered to suspend Lois Lane.

Perry White: Well, I just went head-to-head with the publisher and five of the paper's lawyers. Felt like it was the Alamo, and I was on the wrong side. Lois, um . . . I, uh . . . I'm gonna have to suspend you.

Perry White: I just spent the last two hours fighting a six-headed monster, and in the end I lost. Sorry.

Perry White: Well, they're frightened, that's why. Viologic has got deep pockets. We don't.

BELOW: Lois Lane says her life is the Daily Planet:

Lois Lane: But my life is the Planet. What am I gonna do? Can't you just stick me in some other bureau or something?

Perry White: I tried. And if it was just a case of your not being able to produce your source, I could have. But now that you're linked to his death, well . . . Legal feels that the Planet has got to distance itself from you. Lois . . . I swear to you . . . I'll do everything in my power to see that you get reinstated just as soon as possible.

[Lois says nothing. She looks very, very sad. She turns and exits Perry White's office. After Lois leaves, Perry looks like he is about to cry.]

Lois Lane is very depressed about being suspended from her job as a reporter for the Daily Planet. Her job as a major part of her self-identity.

Timecode: 33 minutes, 5 seconds: Superman visits Lois Lane at her apartment so he can console her.

BELOW: Superman: what I stand for is more important than anything else: 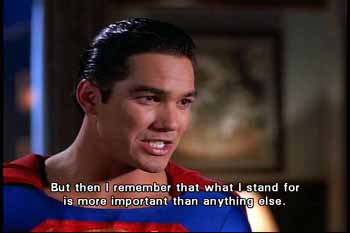 Superman: Lois, if anyone knows what it's like to be on the outside, I do. Sometimes, I feel like I'm out there fighting all alone. Sometimes I feel like giving up. But then I remember that what I stand for is more important than anything else. Your work is very important to the people of Metropolis. You're a brilliant, passionate journalist. Adversity has never stopped you before. Don't let it start now.

BELOW: Superman tells Lois Lane: don't stop believing in yourself: 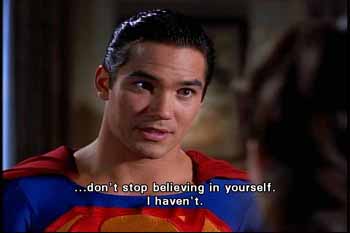 Superman: I'm not surprised. Clark is a very smart guy.

[Superman cleans up Lois Lane's messy apartment for her.]

Superman: Lois, don't stop believing in yourself. I haven't.

While he and Martha were riding the new subway on its inagural run, the subway went out of control due to the maneuverings of the head of Viologic. It was all part of a ploy to kill the governor so that his own candidate, Daniel Hansen, could get elected and eventually award big government contracts to Viologic. Superman saved the train of course, but while the train was out of control, one of the governor's advisers fainted. Jonathan and Martha Kent helped him and later got to know him some.

BELOW: Jonathan Kent is happier now, having met Al - a new friend from Kansas in Metropolis: 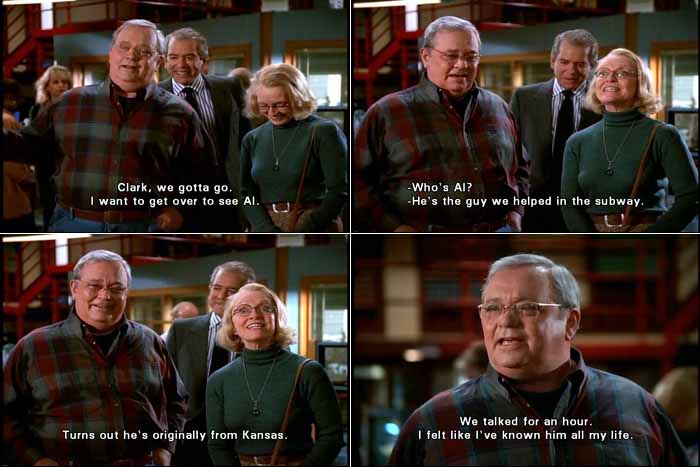 Jonathan Kent: Oh, Clark, we've gotta go. I want to get over to see Al.

Martha Kent: He's the guy we helped in the subway. Turns out he's originally from Kansas.

Jonathan Kent: It's unbelievable how much we have in common. After talking to him for an hour I felt like I've known him all my life.

Martha Kent: Looks like there's one more reason for us to visit Metropolis now.