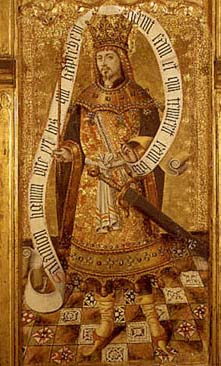 The Religious Affiliation of
King Solomon

The Eastern Orthodox Church and Islam both clearly regard Solomon as a great prophet. Other religious traditions, including other Christian denominations, do not necessarily regard Solomon as a "prophet" in the same way that other figures (for example, Solomon's contemporary Nathan) are regarded as prophets of God. Solomon's wisdom was famous, but he was also a fallen figure who fell out of favor with God. How (or whether) he is regarded as a "prophet" varies somewhat depending on the religious tradition or Biblical commentator consulted.

In Marvel comics, Solomon was first seen in a flashback in Black Panther #1 (Jan. 1977). King Solomon's Tomb is the location of a Black Panther adventure, and the source of the powerful magical items known as "King Solomon's Frogs." These items have the power to move people and objects through vast distances of both time and space.